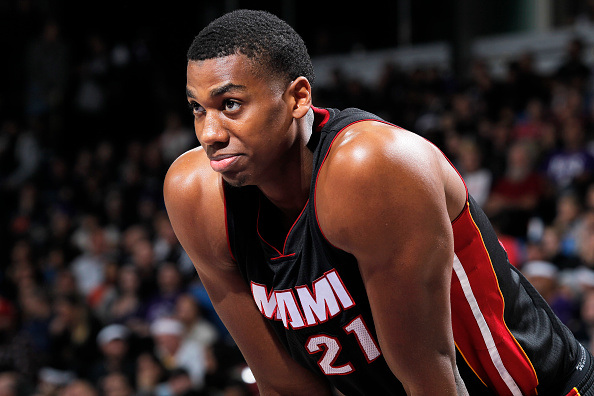 The Miami Heat are barely hanging on for a playoff spot in the weak Eastern Conference.

Despite being five games below .500 (19-24), the Heat are currently slotted as the seventh seed in the East. Although it is only midway through the NBA season, the fact that teams such as the Charlotte Hornets and Detroit Pistons are on massive hot streaks combined with Miami’s underwhelming play has caused concern that the Heat may miss the playoffs altogether.

Currently, Miami stands just a game ahead of the Brooklyn Nets for the final two playoff spots. The Nets stand at a record of 18-25, while the surging Pistons (17-26) are just two games behind the Heat.

Heat President Pat Riley was asked on Thursday about his opinion on the current state of the franchise. Needless to say, he was blunt in assessing the mediocrity of the 2014-15 Heat:

“We’re in the fight. I think you have to recognize who you are and what your challenge is this year. We’re in the fight—but we’re not in the fight like we were before for the top of the conference. We are in the fight with five or six other teams for probably the playoffs—spots six, seven and eight—so get real about it, don’t feel sorry about it, and get after it.”

Despite Dwyane Wade playing at an All-Star level at the age of 33, his efforts have all gone for naught as the team has struggled with consistency issues all season.

If Miami is to hold onto one of the last two playoff spots and clinch a playoff berth they’ll need their 7-foot center to continue playing at a high level—that would be none other than Hassan Whiteside.

Whiteside injured his ankle in the first half of a loss to the Oklahoma City Thunder on Tuesday night. Prior to spraining his right ankle, the 25-year-old had gone 5-for-5 from the field in scoring 10 points in just 11 minutes of action.

Due to the ailment, Whiteside missed Wednesday’s 78-76 loss to the Hornets. Despite the Heat playing their best defensive game of the season in holding the Hornets to 34 percent shooting, Miami was embarrassed in arguably their worst rebounding performance of the year. The Heat gave up 20 offensive rebounds—the most versus any opponent this season—and were bested on the glass by a total of 56-41.

In the West Coast road trip prior—five road games played with a healthy Whiteside—the Heat bested their opponents on the glass in four of those games. The team went 3-2 on the road trip, which is something the team had never accomplished during the “Big Three” era.

Because of the 7-footer’s continued development over the last month, coach Erik Spoelstra inserted Whiteside into the starting lineup. He started three games before sitting out the Heat’s last game due to injury.

ESPN NBA commentator Mark Jackson stated that he believes the center can sustain his level of play, via a conference call:

“I certainly think he can sustain it. The reason why is because he is doing things that he is gifted to do: blocking, altering shots, rebounding, finishing at the rim, playing with high energy. He is a guy playing with a chip on his shoulder and he’s out to prove people that rejected him or thought he wasn’t good enough, wrong.”

Fellow ESPN commentator, Jalen Rose, stressed that the Heat are going to need Whiteside’s production if they hope to advance to the postseason:

“If the Heat are gonna salvage their season, whether that’s making the playoffs and/or advance they’re gonna need that five down low to put next to Chris Bosh and Chris Andersen. Keep Bosh more at the four as much as possible, where you have the opportunity to place him at either spot when the game is closing and he doesn’t take that pounding. They’re definitely going to need his production.”

The fact of the matter is this—Miami is not a very good team—they rank dead-last in rebounding, and 28th in points and assists per game.

Outside of Wade’s resurgence and Whiteside’s breakout season, the Heat haven’t had anything to feel good about this year. Their starting power forward, Josh McRoberts, is out for the season due to a torn meniscus, Bosh hasn’t taken that next step toward being a legit No. 1 option and the point guard situation is murky to say the least.

However, as Riley stated, the Heat’s objective at the moment is just to get into the playoffs.

If they hope to hold on to one of those remaining playoff spots, it is absolutely imperative that Whiteside continues to play at a high level, and more importantly, remain healthy.
[xyz-ihs snippet=”Responsive-Ad”]