For Mario Chalmers, Confidence is Key 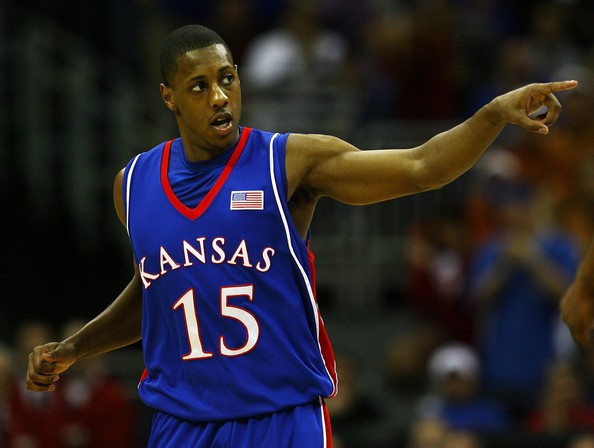 We hear about it all the time in sports. It’s tossed around like an overused cliché.

Some players posses the intangible characteristic – or so we believe – to make special things happen at crucial moments in a game. This “it” factor has created some of sports’ biggest and most memorable highlights, firmly imprinted into the minds of fans like indelible ink.

The popular term for this characteristic is “clutch.”

A player with this so-called clutch gene is one who wants the ball in their hands with the clock winding down and takes the final shot.

For years, small forward LeBron James wasn’t considered “clutch.” His philosophy was to get the best possible shot, even when most of the time it meant passing to a teammate who, statistically speaking, had a better shot.

When James won consecutive NBA Championships in 2012 and 2013, the “clutch” narrative surrounding him dissipated and was passed on to other players who happened to find themselves on teams whose seasons didn’t end with them hoisting a trophy.

This story is universally true throughout professional sports. Consider quarterback Peyton Manning: an All-American at the University of Tennessee, the 1998 top NFL draft selection, a 4-time AFC Offensive Player of the Year, a 6-time Pro Bowler, a 5-time All-Pro, and a 2-time NFL MVP, all by the end of his eighth NFL season. Despite his obvious success, Manning was criticized and blamed for not having won a Super Bowl. When he reached the pinnacle of his sport the following NFL season, suddenly the previous talk about not being able to win the big game magically disappeared.

Miami Heat point guard Mario Chalmers exudes confidence from every pore as if it were part of his genetic code. Ask anyone who knows the 6-foot-2, 190-pound Anchorage, AK native, and you’ll see that he has the utmost confidence in his abilities. He sincerely believes he is the best player every time he steps on the hardwood, even the past four years with former teammate James, who in that same timeframe won two league MVPs, as well as two NBA Finals MVPs. It’s the key to what makes Chalmers uniquely Chalmers.

As fans, we can characterize Rio with the term clutch because he has proven, on the game’s biggest stages, he doesn’t “shrink” from the moment. He’s not afraid to make a play or take a shot with the game in the balance. Most importantly, Chalmers has won.

During his junior, and final season at Kansas, Chalmers led the Jayhawks to the Big 12 Tournament Championship with a memorable performance in the title game. Against #6 Texas, Chalmers scored a career-high 30 points, connecting eight times from beyond the arc.

Chalmers’ penchant for making big plays on the big stage continued in the 2008 NCAA title game. With his team trailing, Chalmers took the “biggest shot ever made in Kansas history,” according to Jayhawks Head Coach Bill Self. His 3-pointer with 2.1 seconds remaining tied the game to send it into overtime. Ultimately, the Jayhawks won their first title in two decades with Chalmers stepping up to the challenge and winning Most Outstanding Player.

In a similar fashion, on the NBA’s biggest stage, Chalmers once again came through. With the Heat down by three and less than 30 seconds to play in Game 2 of the 2011 NBA Finals, Chalmers didn’t seem to remember his five previously missed three-point attempts in the game, calmly knocking down a jumper to tie the game.

However, the bigger takeaway shouldn’t be overlooked. Despite losing the game, Chalmers made a game-tying shot in the final minute of the biggest stage in professional basketball.

While those big shots have become associated with Rio, so too have the angry faces directed his way whenever he does something that bewilders his teammates. Between throwing lead passes that resulted in teammates flying into the stands, to failed attempts at correcting his mistakes, to shots that leave one shaking their head in disbelief, Chalmers can equally draw the ire of fans and teammates alike.

All of this provides us pause as we lead up to the 2014-2015 NBA season. The seventh season since Chalmers was selected 34th overall in the NBA Draft – the same draft that produced Michael Beasley with the second overall pick for Miami.

Throughout his career, Chalmers has had his fair share of highs and lows. As a rookie he started all 82 games, but his next two seasons combined he started in only 50. Chalmers eventually lost his job to journeyman Carlos Arroyo and then Mike Bibby in that time.

Losing his prime position led to a dramatic improvement the past three seasons for Chalmers. In that span he started all 214 regular season games in which he played. His minutes shot up from 22.6 in 2010-2011 to 29.8 last season, the most since his rookie season.

As his playing time increased, his production did as well. The past four seasons saw Chalmers go from a career-low 39.9 percent shooter to a career-high 45.4 percent shot-maker. Likewise, his 3-point percentage went from 35.9 in 2010-2011 to a career-high 40.9 in 2012-2013. Chalmers was able to focus on becoming a better shooter without having to worry about running an offense – LeBron and Dwyane Wade handled most of those responsibilities. As a result, Chalmers was normally relegated to standing behind the 3-point line and waiting to be a recipient of a pass, rather than an attacking component of Miami’s offense. (Of note, Chalmers led KU with 169 assists his final season.)

A specialty for Chalmers has always been his long arms that allow him to get into passing lanes. Since finishing his college career a member of the Big 12 All-Defensive Team, Chalmers has normally been among the NBA’s best in creating turnovers. Chalmers, KU’s leader with 97 steals in a single season, ranked 3rd in the same category in the NBA his rookie season (160) and finished last season 16th (119).

With James’ unexpected departure, Miami is losing a player who dominated the ball so soundly, he ranked 5th in usage rate last season. Because of this, the Heat’s shot distribution will look much different next season. Plus, there will be a need for a natural point guard – someone to run the offense the way LeBron did, although not as effectively.

Although Chalmers had a relatively forgettable 2014 postseason, one that ended with Head Coach Erik Spoelstra completely removing him from the lineup in the deciding Game 5 of the NBA Finals, it doesn’t mean his best basketball days are behind him. While his 6.4 points per game were his career-low for a postseason, we should be cognizant of the fact Heat President Pat Riley – while wanting to maintain a winner – offered Chalmers an $8.3 million contract for two years.

There is always the potential for a big game in Chalmers. In January 2013, he tied a franchise record with 10 makes beyond the arc and finished with 34 points in Sacramento, against the Kings. The following three games on the road trip saw Chalmers combine for three points fewer than that career-high, culminating in a four-point outing against the Los Angeles Lakers. Such inconsistency has been Chalmers’ largest obstacle and remains the biggest hurdle he must overcome.

With more opportunity to showcase his skills, coupled with his unwavering confidence, there is plenty of reason to expect Chalmers to rise to the occasion and enjoy a successful season.
[xyz-ihs snippet=”Responsive-Ad”]