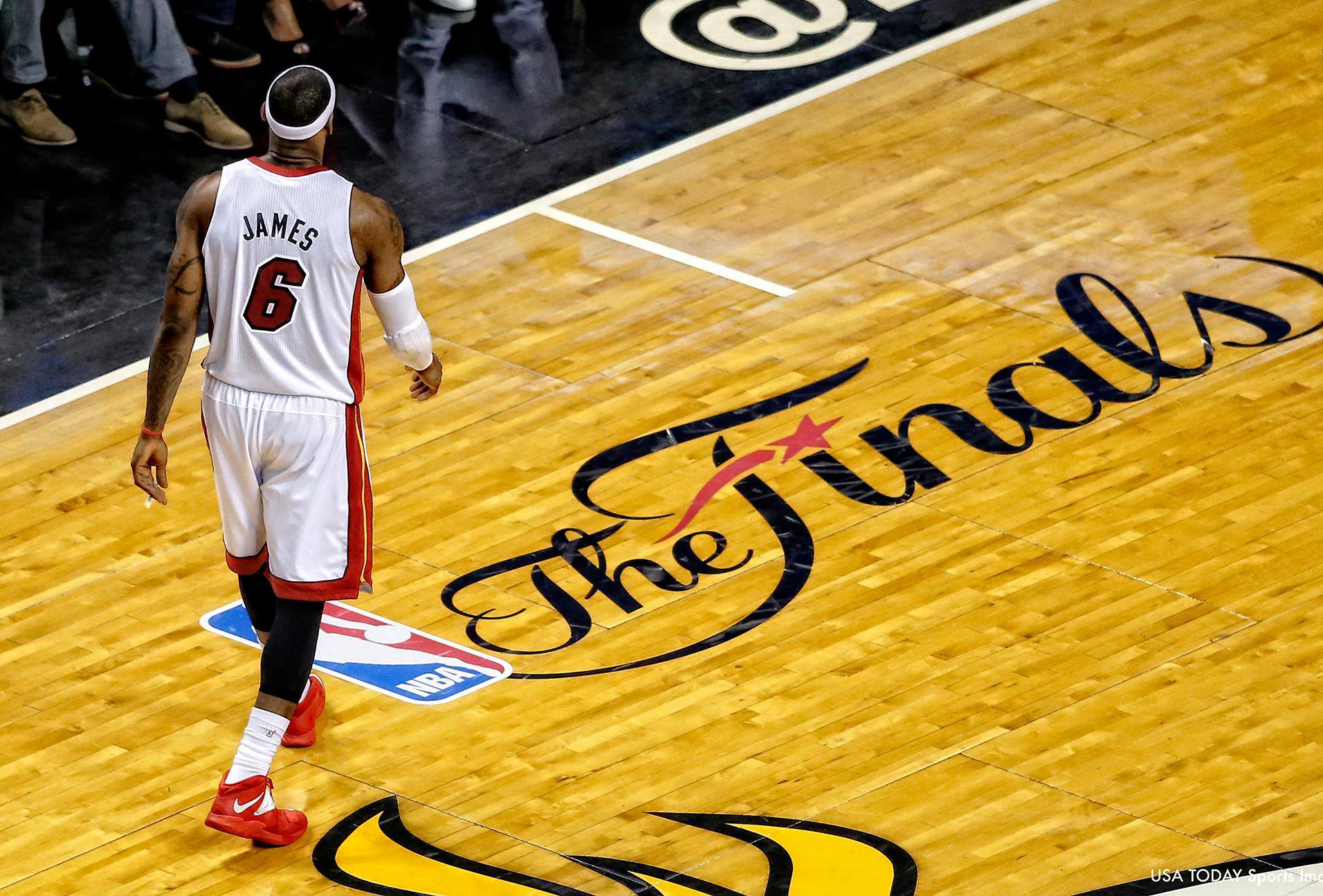 (San Antonio, TX) — With chances at a threepeat hanging by a thread, LeBron James put the Miami Heat on his shoulders Sunday night at the AT&T Center, asserting himself early and often en route to an MVP-level performance. However, James’ burden eventually became dead weight, as the rest of the Heat lineup failed to counteract an extremely efficient San Antonio Spurs squad in a 104-87 loss, ending Miami’s two-year championship reign in five games.

James, who holds the highest-scoring average in NBA history when facing elimination with 31.9 points per game, valiantly scored 31 points on 10-of-21 shooting in a desperate attempt to extend the series back to South Beach for a game six, but could only look around helplessly as his teammates missed shots, committed turnovers and failed to help prevent another Spurs’ offensive onslaught. James notched a double-double with 10 rebounds, but sat on the bench in frustration during the final 6:30 as the Spurs maintained atleast an 18-point lead the rest of the way. With fellow Big Three members Dwyane Wade and Chris Bosh combining for 24 points on 10-of-26 shooting, the Heat will now focus on the future of the trio, as James, Wade and Bosh each hold player options for next season.

When asked about the future of the Big Three, James declined to address it, acknowledging that the thought had not even crossed his mind.

“I’m nowhere at that point,” James said. “We went to four straight Finals. [I’d] take 50 percent of winning championships any day. I know me, D-Wade and C.B. (Bosh) aren’t proud of the way we played. That’s the last thing we’re thinking about this summer.”

Miami, in a last-ditch effort to infuse some scoring prowess early in the game, moved Wade to point guard and started Ray Allen at shooting guard, benching regular starting point guard Mario Chalmers in the process. The new lineup had the Spurs reeling during the first quarter, as the Heat opened with an explosive 22-6 start, led by James’ 12 points.

“I just wanted to try to inspire my teammates [during the game’s first six minutes],” James said of his early scoring outburst.

As the Heat shot an astounding 61 percent from the field, while holding the Spurs to just nine percent shooting during the start, Bosh’s pregame assurance of a Game Five victory seemed to hold true. That is, until the Spurs of games three and four began to show themselves, as San Antonio made a 16-7 run to cut the Heat’s deficit to seven (29-22) at the end of the first quarter, Miami’s first time leading after the opening 12 minutes this series.

Before the Heat could take any advantage of its steady first quarter, the Spurs came out firing with an 8-2 run for a 37-35 lead with 4:47 remaining in the first half, Miami’s first deficit of the game. The Heat would surprisingly never lead for the rest of the game, suffering through a 21-7 Spurs run after leading 33-26 with 9:17 left in the half. After shooting 45 percent in the first quarter, the Heat went through a dry spell with a dismal 4-of-14 shooting in the second quarter, scoring only 11 points (to the Spurs’ 25) and trailing 47-40 at halftime.

Throughout the second half, the Heat looked very vulnerable, misfiring on 12-of-18 shots and trailing by as much as 22, as reserve Patty Mills led the charge with 14 points in the quarter. Despite Tony Parker only scoring two points after three quarters, the Heat again could not counter the Spurs bench, which outscored the Heat reserves 47-24. Seldom-used Michael Beasley made his debut in the series with nine points and three rebounds in 17 minutes.

The two teams then unloaded their benches throughout the fourth quarter, as the Heat got no closer than 14 points and trailed by as much as 20 before confetti covered the Spurs’ hardwood in wake of San Antonio’s first NBA title celebration since 2007. Kawhi Leonard, after struggling through Games One and Two, was named Finals MVP after another tremendous outing, leading the Spurs with 22 points on 7-of-10 shooting (3-of-4 from beyond the arc), adding 10 rebounds. Mills added 17 points (5-of-8 from three), while Manu Ginobili scored 19 points in his sixth man role.

With questions about the health of his right knee, Wade had another poor shooting night, hitting on only 4-of-12 shots for 11 points. Wade, who scored 22 points in game three, had a total of 21 points in the Heat’s last two contests.

“I felt fine,” Wade said of his knee. “I just struggled a little bit offensively. It’s the nature of the game.”

After scoring 36 total points in games one and two, Bosh scored a miniscule 34 total points over the final three games, finishing with 13 in the series-ending blowout. Chalmers, meanwhile, was handed an extreme demotion by Heat Head Coach Erik Spoelstra, sitting the entire first half before making his first appearance during the middle of the third quarter. Chalmers had his best game of the series with eight points in 15 minutes, but will face an uncertain future with the team as he will become an unrestricted free agent this offseason. Shane Battier, meanwhile, played the final game of his 13-year NBA career, going scoreless in 11 minutes.

With eight of the team’s 15 players entering free agency, the future of the Big Three currently in limbo and the possibility of adding Carmelo Anthony in discussion, most spotlights will shine on a franchise that reached several accolades in a four-year span, including four straight Finals appearances (not done since 1984-87 Boston Celtics) and two consecutive NBA championships (not done since three straight titles by 2000-02 Los Angeles Lakers). In the aftermath of a disheartening series defeat, Spoelstra said he offered a choice set of words for his team.

“The message was pretty brief: ‘You can’t be so jaded that you can’t appreciate what this team has accomplished…to be able to make it to the Finals, to make it four straight years,’” Spoelstra said. “I trust the character of this group, that there’ll be a benefit from this (series loss).”

In what was a remarkable run to a fourth consecutive Finals series, the Heat stayed consistent and confident throughout a 54-28 regular season that saw the top-seeded Indiana Pacers consume all of the hype as the team to finally dethrone the (then) three-time defending Eastern Conference championships. Miami entered the playoffs seeded below Indiana, but instantly showed its mettle as a defending NBA champion, bullying through the Charlotte Bobcats and Brooklyn Nets during the first two rounds before overwhelming the crumbling Pacers in the Eastern Conference Finals. Facing a vengeful Spurs team it beat last year in seven games for a second straight NBA title, the Heat struggled to gain any control throughout the series rematch. As James’ cramps in game one, Wade’s deterioration as a dependable scorer and Bosh’s lack of touches and production sent the Heat spiraling out of contention against San Antonio, Spoelstra could only acknowledge the opponent for being the better team throughout the series.

“I think you really have to credit San Antonio and their defense, their ability to keep us out of the paint,” Spoelstra said. “We’re a very good offensive team and we weren’t able to display it in this series.”

James echoed the sentiments, saying the Spurs “dominated us in every facet of the game.” But he stood proud of the Heat’s accomplishments during his time in South Beach, yet unwilling to inform reporters of whether or not he wants to continue an outstanding run with his teammates.

“I love Miami…my family loves it,” James said. “When I get to that point (of his future with the Heat), I’ll address it.”

In the midst of a lopsided series defeat, the Heat will enter the summer with more questions than answers for an aging roster, but just as many championship triumphs than tragedies for three All-Stars that came together for the lone goal of multiple NBA titles.

“We didn’t know what to expect when we became teammates four years ago,” Wade said of the formation of the Big Three. “We’ve been successful in what we tried to accomplish.”