Don't Miss
Home / Editorials / Fighting Through Adversity, Goran Dragic Is Proving to Be Worth Every Penny

Fighting Through Adversity, Goran Dragic Is Proving to Be Worth Every Penny 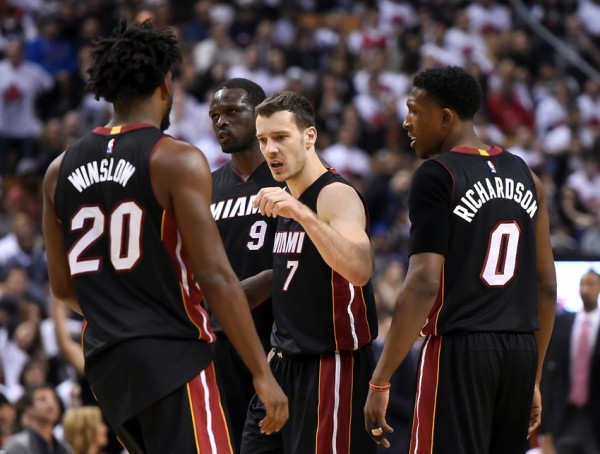 It may not have been apparent in the regular season or even the first few games of the first round, but Goran Dragic is showing the league why he scored that massive 5-year, $85 million contract last July.

The Miami Heat’s starting point guard struggled to find his way early in the season, averaging 10.8 points and 4.4 assists in the month of November. Not promising for the guy you have locked up for the next five years. But Dragic, who turned 30 Friday, continually worked on assimilating with the Heat and founds ways to make it work. In every month since November, the second-round pick from Slovenia had improved his production, reaching his peak in March when he put up 16.6 points and 7.7 assists.

Despite the progress in the regular season, questions and concerns surfaced about the first-time playoff starter’s capability in the postseason. Through the first six games against the Charlotte Hornets those worries were fair as Dragic had averaged a mere 12.3 points and 4.8 assists while opposing guard Kemba Walker torched the Heat with 25 points a game.

But with the Heat facing elimination in a pivotal Game 7, Dragic stuck with it and saved his best for last. The 6’3″ point guard led the Heat to a 106-73 rout behind a game-high 25 points on 64 percent shooting while Walker scored just nine points on 3-of-16 shooting.

In the Heat’s first two games against the Toronto Raptors, Dragic led the team in scoring again with 26 and 20 points, respectively. He’s averaging 23.7 points on 59.2 percent from the field in his last three games, a vast improvement from what was exhibited initially.

Midway through Game 2, Dragic had sustained a lethal blow to the face — causing him to bleed and receive eight stitches. No stranger to hits in the face, the veteran had two separate incidents where he had teeth knocked out earlier in the season. Despite the blood and hassle, the guard returned to Game 2 in stellar form, not just leading the Heat in scoring for the third straight game but sinking a game-tying three-pointer with 10.5 seconds left to send the game into overtime.

“It’s okay. It’s happened so many times that it’s good but of course it’s a little bit tougher to eat but hopefully in a couple days it’ll be better.” Dragic said on his busted lip.

This is the Dragic the Heat paid for and fans have desperately waited to see. Despite the long delay, the eight-year pro has shown up at the most important time of the season. Enhancing his offensive efficiency and fighting off blood, stitches and a plethora of criticism, Dragic has proved to be one of the elite point guards in the East right now.

The Heat’s starting point guard may not have gotten All-Star consideration or garnered a better regular season record, but he is giving the Heat everything he has and more when it’s mattered most.

When the tough guard endured the elbow and drilled the clutch triple in Game 3 there was a sense of entitlement for Heat fans all over. That’s right, that’s our point guard. The way Dragic has played playoff basketball, fighting through injures and not just showing up, but showing out, has proven that the $85 million point guard was worth every penny.
[xyz-ihs snippet=”Responsive-Ad”]