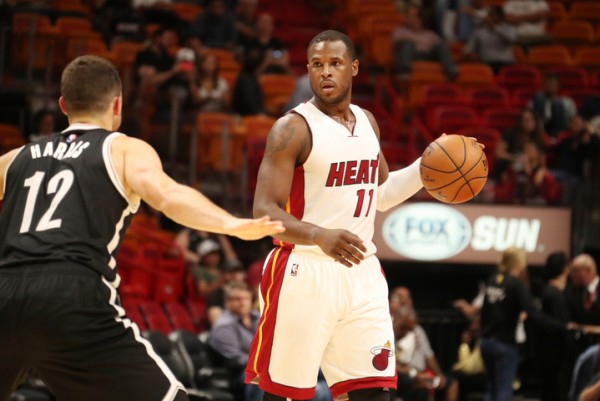 It’s been a crazy offseason for the Miami Heat, who will enter the new year without two of its longtime stars. The team is in the midst of a rebuilding process as it shakes off the last remnants of the Big Three era with Dwyane Wade moving on to the Windy City and Chris Bosh waylaid by medical issues.

Bosh is actually not expected to play for the entire season, though we’ve pointed out that the team plans to wait until the playoff deadline before it waives the 11-time All-Star. He was initially hopeful for this season, but continued problems with blood clots have likely ended his career—not only with the Heat, but with professional basketball in general. While we’re definitely hoping for the best for him, it’s important to be realistic about what we might be working with this season.

Along with Bosh’s medical maladies, Wade’s departure came as a huge blow to many of the Miami faithful. However, it could turn out to be one of the best things to recently happen to the team. With Wade out of the way, there’s a whole lot of potential cap space opened up. Also, the Heat now have the necessary space to move on and begin to rebuild with fresh blood.

It’s truly the start of a new era and thankfully there are several promising young players for the team to rally around. Hassan Whiteside proved to be a force of nature last year, and it appears that the team is looking to rebuild itself around the 7-footer. During the 2015-16 season, he averaged a double-double (14.2 points and 11.8 rebounds) along with an impressive 3.7 blocks per game. In addition to Whiteside, the Heat boast some strong players (like veteran Udonis Haslem) who bring the necessary experience for a team that’s steadily getting younger.

In looking at preseason play so far, one takeaway has been the new emphasis on shooting. It’s been noted that the team has six players shooting at least 40 percent from beyond the arc. Dion Waiters, Goran Dragic, Justise Winslow, and Wayne Ellington are all shooting the ball well so far. Maybe the biggest surprise has been the performance of Tyler Johnson, who’s shooting an incredible 80 percent from three as of this writing.

And taking a look back, last year was a major improvement over the previous season. The Heat finished first in the Southeast Division and took the Toronto Raptors to seven games in the conference semifinals. This was the Heat’s first deep playoff run since the departure of LeBron James after the team made four straight finals appearances and won the championship twice behind the strength of its Big Three. Not a bad rebound considering that they didn’t make the playoffs at all during the 2014-15 season.

There’s still plenty of time for Erik Spoelstra and Pat Riley to continue to tinker with the roster. Without being forced to sink a ton of money into the salaries of aging veterans, it could turn out be a very exciting time to be a Heat fan after all.
[xyz-ihs snippet=”Responsive-ImagenText”]