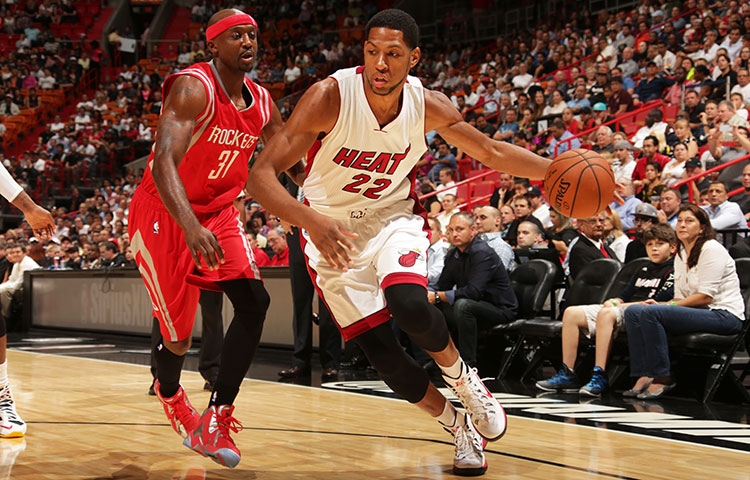 When the Miami Heat signed Danny Granger during the offseason, the franchise did not have high expectations for the small forward out of New Mexico.

Granger was coming off of the worst season of his NBA career, as he averaged just slightly over eight points per game and was traded twice during the 2013-14 season.

It wasn’t always like this for the former Indiana Pacer. Granger was an All-Star at the age of 25 in just his fourth season in the NBA. During the 2008-09 season, he averaged a career-best 25.8 points per game en route to his first, and to date, only All-Star appearance of his career. Many expected it to be the first of many All-Star selections for the 6’8″ forward.

Granger struggled through ailments during the 2009-10 campaign, as he was limited to 62 games. Two seasons later, the University of New Mexico product played in just five games due to patellar tendinosis.

When the Heat officially signed Granger to a two-year contract on July 14, they were making a low-end investment on a player that hadn’t been a viable contributor to an NBA roster in over two seasons.

Through the first two months of the 2014-15 season, the former Pacer didn’t look much different than the guy who warmed up the bench over the past two seasons with Indiana and the Los Angeles Clippers. Granger missed 20 of the first 27 games of the season due a left knee injury.

In those seven games played, his impact was minimal—he scored just 28 total points and saw more than 22 minutes of action in just one of those contests.

However, the 31-year-old has started to make his impact felt as of late. Over the last two games, Granger has scored 39 points, including a 21-point, 6-for-7 from beyond the arc performance in a loss to the Orlando Magic on Monday night. He also scored 18 points on 7-of-10 shooting versus the Memphis Grizzlies in the game prior.

Before this two-game stretch, the veteran was perhaps the biggest reason why the Heat were able to close out the Cleveland Cavaliers in the team’s Christmas Day triumph over LeBron James. He was part of Miami’s closing unit in that victory, and scored five clutch points in the last few minutes to give the Heat a 101-91 victory.

The former All-Star states his recent scoring outburst is a result of him being healthy:

Even Dwyane Wade, who currently leads the squad with 23.3 points per contest, sees the difference in his teammate’s play:

“It’s been great. You could see his confidence coming. It’s a great jolt for us right now.”

Despite Granger’s recent uptick in scoring over the last couple of games, the Heat are still just 14-18 overall, and 4-6 in their last 10 games. Miami has struggled with injuries all season long, with Josh McRoberts having been ruled out for the season, and Chris Bosh missing eight games during December due to a calf strain.

In other words, the Heat can take all of the help they can get at this point. Including help from a guy who thought his career was over just several months prior.

“Now that I have that confidence back, it’s just playing my game. At times tonight, I felt like four years ago, honestly. It was just easy to play without worrying about your body. It’s exciting, honestly.”

As the Heat enter a new calendar year fighting to clinch a playoff berth for the seventh consecutive season, Miami will hope that the veteran forward is able to maintain that confidence for the next several months.
[xyz-ihs snippet=”Responsive-Ad”]