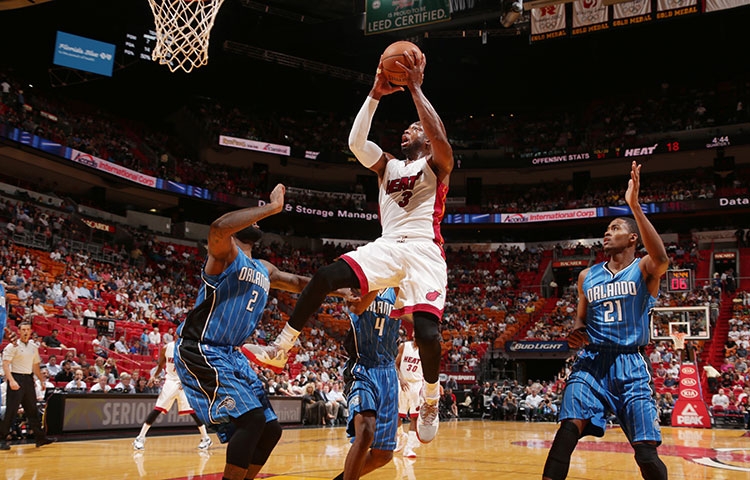 (Miami, FL) — It looked like the Miami Heat were primed for a photo finish on Monday night as Danny Granger hit his sixth three pointer of the night to put the Heat up 101-97 with 1:38 to play.

That’s when Orlando Magic shooting guard Victor Oladipo took over by scoring or assisting on the Magic’s final five points to put the Heat away, 102-101.

After the game, head coach Erik Spoelstra said, “That was a really fast run in less than two minutes. But that’s competition.”

Dwyane Wade, who finished the night with a game-high 25 points to go along with six assists had a chance to put Miami over the top at the buzzer, but elected to take a tough fall-away jumper as the buzzer sounded.

After scoring 15 points in the fourth quarter on an array of drives to the basket, Wade said that the opportunity was not there for the final possession.

Both Wade and rookie center Hassan Whiteside did most of the heavy lifting in the final period as Whiteside finished with eight points, seven rebounds, and two blocks in just 18 minutes of action.

After missing the previous eight games, center Chris Bosh made his return in a solid outing by scoring 20 points and hauling down eight rebounds.

For the Magic, center Nikola Vucevic feasted in the paint all night long as the center from the University of Southern California, finished the night with 26 points and nine rebounds.

Although the loss was disappointing, the fact that the Heat had 13 out of 15 players dress was encouraging. Another positive for Miami was the play of Granger, who continues to shoot lights out from beyond the arc as he finished with 21 points including six three pointers from beyond the arc.