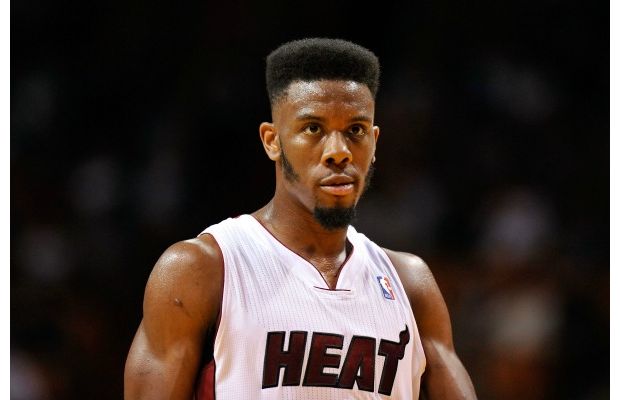 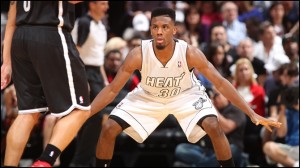 Getty Images, “But while Chalmers figures to remain the Heat starter, Cole’s superior defense could allow for him to continue supplanting him in the fourth quarter, as he did against the Warriors, Hornets, and Hawks.”

The Miami Heat defense, or lack thereof, as has often been the case this season, has been perhaps the most incessant topic of conversation around the team thus far, with its uncharacteristic struggles casting at least a small bit of early-season doubt about whether it can successfully defend its NBA title.

The last 11 NBA champions all finished in the top 10 in defensive efficiency – the two Heat championship teams finished ninth (2006) and fourth (2012) – and Miami has spent the majority of this season in the bottom 10 of the league in the category.

That figure has seen improvement in recent games though, with Miami moving up to 18th in points per 100 possessions after Saturday’s 102-72 win over the Washington Wizards.

It was the fourth consecutive game that the team has held its opponent under 100 points after failing to do so in five of the previous six outings.

While there are other factors at work during this recent stretch – New Orleans is a poor offensive team, and Washington is the league’s worst – a correlation can also be drawn to increased minutes for Norris Cole and Joel Anthony.

The 6-foot-9 Anthony, who was an integral part in forming the Heat’s defensive identity of the previous two seasons, fell out of the rotation to start this year, as the team fully embraced its small-ball lineup that featured Shane Battier at power forward and Udonis Haslem as backup center.

The lineup paid dividends on offense, with the Heat lighting up the scoreboard and scoring 110 or more points in six of the season’s first 13 games.

But Miami opponents continued to find easy scoring opportunities against an increasingly vulnerable defense, topping the 100-point mark in nine of 14 contests to start the year.

The trend has started to move in the opposite direction of late, but for it to continue that way, the Heat may need to continue to lean on arguably the team’s two most impactful defenders (who aren’t named LeBron James).

After languishing on the Heat bench for much of the season, Anthony has seen his minutes reach double figures in five consecutive games, topping out at 18 minutes in a 101-90 win over Atlanta.

Anthony has had a positive +/- in four of those five games, including +10 against New Orleans and +9 against Atlanta, and Miami has limited opponents to 92.6 points per game, down from the 98.1 the team is allowing for the season.

For the season, the Heat are 11.8 points per 48 minutes worse on defense when Anthony isn’t on the court than when he is.

It comes as no surprise to Miami coach Erik Spoelstra, who said after Saturday’s game that the man who once earned the nickname “avatar” for his ability to appear to be in two places at the same time, makes a major tangible impact on the Heat’s ability to get stops.

“We know how valuable he is to our defense,” the coach said. “He covers so much ground and is so athletic. He’s the definition of two places at once. With our pick and roll defense, there are not many centers in the league that can do what he does in terms of impact pick and roll and get back to the rim and challenge shots and change shots. He activates our speed and athleticism.”

On the subject of speed and athleticism, the case of Norris Cole is perhaps most interesting of all considering his increased role in recent games and the diametrically opposing style to that of his starting counterpart Mario Chalmers.

Chalmers has long been known for his active hands defensively and ability to get steals and deflections, and once again he is among the league’s best thefts, ranking 16th in the NBA in steals at 1.6 per game.

However, the fifth-year guard has also shown a troubling inability to contain opposing point guards this season, while the younger Cole has given indications that he is developing into one of the most tenacious young defensive guards in basketball.

According to NBA.com, starting NBA point guards – i.e. regular starters, not injury replacements – have shot just 6-of-42 (14.2 percent) from the field in 158 minutes against the Heat when Cole is on the floor.

In 339 minutes against the Heat when it’s Chalmers instead of Cole at point guard, those same starting point guards have connected on 63-of-122 shots (51.6 percent).

Eastern Conference point guards Williams, Felton, Jeff Teague, and Brandon Jennings, have shot a paltry 1-of-21 from the field against Cole.

The same quartet of players has managed to make 34-of-61 shots when Chalmers is on the court.

The contrast goes beyond simple shooting stats however, as opposing lead guards are also finding fewer playmaking opportunities against Cole.

Of the 11 regular starting point guards the Heat have faced, six are seeing their average number of assists per 36 minutes drop by more than 10 percent against Cole, while only one is doing so against Chalmers.

It’s not just the opposing point guards who are finding it harder to score when the second-year player from Cleveland State is on the floor.

In the 10 games in which Cole has played 20 or more minutes, Heat opponents are averaging 90.3 points per game.

In the nine games in which Cole has played fewer than 20 minutes, Heat opponents are scoring 104.1 points per game.

In the only two games that Cole has missed this season, Miami has surrendered 110.5 points per game.

In a league in which so many of the top offenses are driven by a quick point guard’s ability to break down the defense with dribble penetration, a defensive guard capable of shutting off that penetration is perhaps just as valuable as a great rim protector.

Of course, there’s another end of a basketball court, and that’s primarily the reason why Cole and Anthony have been assigned more limited roles, and why Chalmers will likely remain the starter at point guard despite his defensive struggles.

With two slashing wings in James and Dwyane Wade, Chalmers’ ability to stretch the court with the threat of his perimeter shooting helps create extra space on the court for driving lanes.

Though Chalmers’ shooting numbers are down this year – 32.1 percent from the three-point line and 39.7 percent from the field – opponents still respect his ability to knock down open shots, which is an ability that Cole is still working to demonstrate.

But while Chalmers figures to remain the Heat starter, Cole’s superior defense could allow for him to continue supplanting him in the fourth quarter, as he did against the Warriors, Hornets, and Hawks.

And though Anthony’s offensive limitations will probably force him to remain a specialist, that specialty should continue to be a consistent weapon in the Heat arsenal.