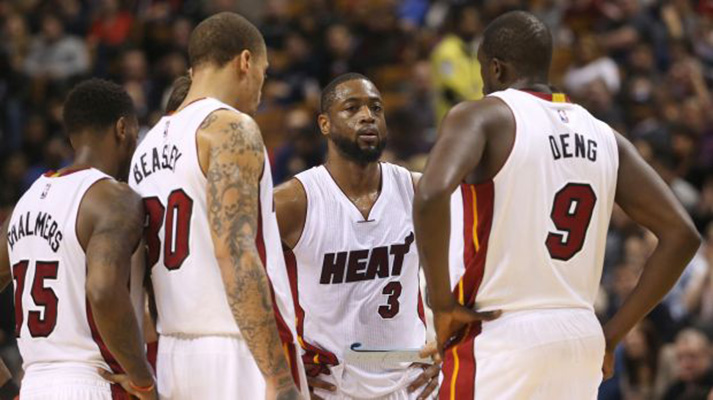 The thought of the Miami Heat missing the playoffs before the season started would have been unfathomable.

Yes, LeBron James spurned Miami for the Cleveland Cavaliers and Ray Allen rode off into the sunset following the Heat’s 2014 NBA Finals defeat at the hands of the San Antonio Spurs.

But this is the Heat we’re talking about here. The four-time defending Eastern Conference champions. The team that still brought back key players in Dwyane Wade and Chris Bosh.

Even before the “Big Three” was assembled, Miami had made the playoffs two consecutive years when guys such as Quentin Richardson were considered top players on the roster.

Erik Spoelstra has been the head coach of the Heat since 2008. Miami hasn’t missed the playoffs a single season during his tenure.

Yet, as we enter the last couple of weeks of the season, it has officially become a reality—the 2014-15 Heat just miss the postseason.

Through all of the injuries and mediocrity, Miami has remained in the top eight of the Eastern Conference for virtually the entire season. There was a short stretch during mid-March where the Heat dropped out of the top eight, but that didn’t last for long.

As we inch towards mid-April, the Heat are back on the outside-looking-in. The team currently sits in ninth place behind the eighth-seeded Boston Celtics by a half-game.

While Miami holds the tiebreaker over Boston due to a season series victory (three games to one), the Indiana Pacers trail just a half-game behind the Heat. Not only that, but the Pacers hold the tiebreaker over Miami and they’ve played one less game than their fellow Eastern Conference brethren.

Though the Heat ended their four-game losing streak with a 105-100 victory over the Charlotte Hornets on Tuesday night, they still don’t control their own destiny—they still need losses from both the Celtics and Pacers if they hope to clinch their seventh consecutive playoff berth. 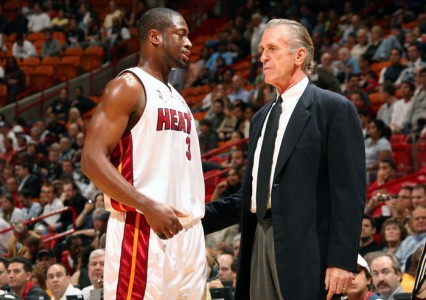 “You can be rest assured that Pat Riley won’t just stand pat and hope for improvements if a roster he tried so hard to build can’t even deliver a playoff berth.”

Which brings us to this question—what if the Heat don’t make the playoffs?

Obviously it’ll be a waste of a season of sorts. Yes, Hassan Whiteside developed into a franchise piece at center and Pat Riley did acquire Goran Dragic to solve the point guard dilemma. But those developments were all for naught in 2015 if the Heat don’t make the playoffs.

Which brings us into an interesting predicament as Dragic likely becomes a free agent during the 2015 offseason. Considering Miami won’t have much cap flexibility entering free agency, they’ll likely have to make some decisions regarding current contracts.

Do they decide to move Chris Andersen’s $5 million cap hit for 2015-16? What about Josh McRoberts’ $5.5 million cap hit? Or Mario Chalmers‘ $4.3 million salary cap figure? Does Luol Deng even figure into the franchise’s plans for next season?

The issue is the Heat have a 91 percent chance of getting a top 10 pick if they did miss the playoffs.

However, coach Spoelstra has immediately dismissed any notion of the Heat tanking for a draft pick:

“We’re not wired that way. For better or worse, I’ve never even heard that in a conversation—thank God —in this building.”

The impact of the Heat making or missing the playoffs is drastic. If Miami clinches its seventh consecutive playoff appearance, chances are things remain somewhat stable—Riley makes the effort to re-sign Dragic to the long-term deal he desires and other than a few players here and there, the Heat enter with a core starting lineup of Whiteside, Chris Bosh, Deng/McRoberts, Wade and Dragic.

However, if Miami misses the playoffs the changes could be monumental.

We know Wade and Bosh will be back, that’s a given. Does Goran return? Do the Heat make an effort to sign a more marquee point guard like Rajon Rondo? Heck, Deng and McRoberts are likely put on the trade block in this event.

Basically, with the exception of a few players, Riley will blow up the entire operation and rebuild even if it appears the Heat don’t have the cap space to do so. He’ll create cap space if it is needed by trading and releasing players.

As silly as it sounds, the last four games of the regular season will dictate which direction this franchise heads into for the 2015-16 season. You can be rest assured that Riley won’t just stand pat and hope for improvements if a roster he tried so hard to build can’t even deliver a playoff berth.

All of the excuses in the world can be made for this team. But the bottom line is the last two teams in the top eight of the conference are seven games below .500. The Heat had Bosh/Wade together for a majority of the first half of the season and it has had Wade/Dragic together for almost the entire post All-Star break.

Despite the team’s struggles all season, Udonis Haslem stresses this team’s goal is to make the playoffs. He still believes Miami can make some damage in April and beyond:

“I only missed the playoffs twice in my career…It’s where I want to be every year. I don’t expect anything less. Hopefully we get a couple breaks….We can go places and win games. We can make a series out of some of these playoff opponents.”

If the Heat miss the playoffs for the third time in Haslem’s career this season, the only thing to expect this summer is change.
[xyz-ihs snippet=”Responsive-Ad”]