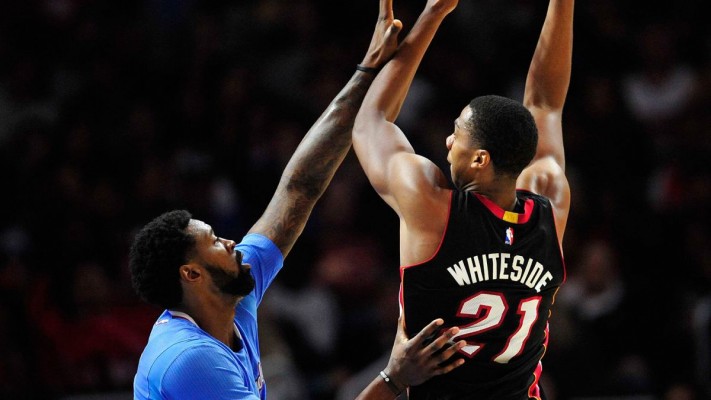 It is safe to say that Hassan Whiteside has been one of the biggest stories of the NBA season.

Before the 2014-15 season began, Whiteside was a little-known professional basketball player who had been selected by the Sacramento Kings in the second round of the 2010 NBA Draft. After seeing just two minutes of total NBA action during his rookie season, he played sparingly in his sophomore campaign, appearing in just 18 total games while averaging just 6.1 minutes per contest.

Over the next two seasons, the 7-foot center would wash out of the NBA and make a living playing pro basketball overseas. Hassan would play in China and Lebanon before making his return to the NBA when the Miami Heat signed Whiteside to a 10-day contract back in late November of this season.

The signing was met with zero fanfare. In fact, Whiteside was signed largely due to injuries that had been accumulating on the Heat’s roster. By late November, Chris Andersen, Udonis Haslem, Josh McRoberts and Chris Bosh had all missed games due to injury.

Despite being met with very little celebration, Whiteside has turned into the Heat’s best two-way player. He has shattered rebounding records, and has established himself as one of the league’s premier defenders. The 25-year-old has already grabbed at least 24 rebounds in three separate games and is averaging 2.4 blocks per game, which is good for third in the league.

The young center has taken the league by storm. Here are five reasons why Whiteside deserves this year’s Most Improved Player award.

First and foremost when you think of Whiteside, you think of numbers. You might not have watched many games of the young center, but you’re immediately wowed by the production that he’s posting.

His PER (player efficiency rating) rating for the season is currently 27.15. That is good for fifth in the NBA, only behind the likes of MVP candidates/former MVP players such as Anthony Davis, Russell Westbrook, Steph Curry and Kevin Durant.

His field goal percentage of .625 would rank second among all qualified players, only behind DeAndre Jordan. His true shooting percentage currently ranks 13th.

This isn’t even including the aforementioned 24-plus rebounding games or the triple-double game in the victory over the Chicago Bulls on January 25, in which he posted 14 points, 13 rebounds and an astounding 12 blocks. The 12 blocks are also a single-game franchise record.

When you look at monster numbers across the board, there isn’t a single player in the NBA that is doing it better than Whiteside this season.