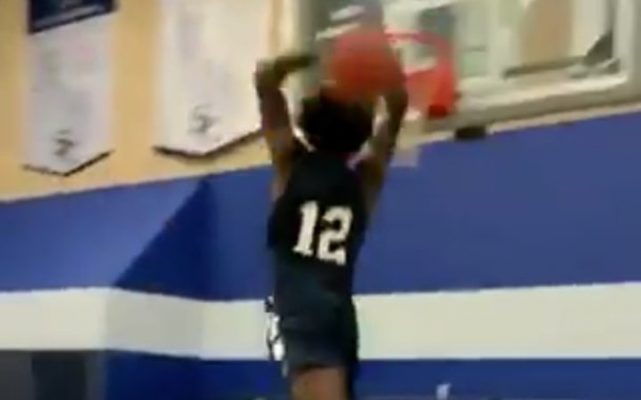 It’s been years since Dwyane Wade and LeBron James played together on the Miami Heat, but the connection they formed in the early part of the decade continues to live on.

Their teenage sons, Zaire Wade, 17, and LeBron James Jr., 14, have been friends for much of their lives. On Wednesday night, they took advantage of being teammates with one another and held an impromptu dunk-off in their Sierra Canyon School gym.

Zaire and Bronny banging out ?

James Jr. is considered a rising prospect in his age range. He played the first half of this past season at Crossroads School, a prestigious private school in Santa Monica, Calif. In his first game for Crossroads, James Jr. scored 27 points. He later transferred to Sierra Canyon, which is known as a national basketball powerhouse.

ESPN reported in 2016 that the younger James had already received scholarship offers from high-ranking basketball programs such as Duke University and University of Kentucky, even though he was just 11 years old. Now, with his high school career about to get started, it will be up to him to earn those offers on the court.

As for Zaire Wade, he is entering the final season of his high school career. With several collegiate offers on the table, it will be up to him to prove his talent in the upcoming season to garner interest from some of the most prestigious programs in the country.

The elder James has publicly stated that he hopes to continue playing in the NBA long enough to share the court with his son in an actual game. The earliest that could happen is the 2023-24 season.