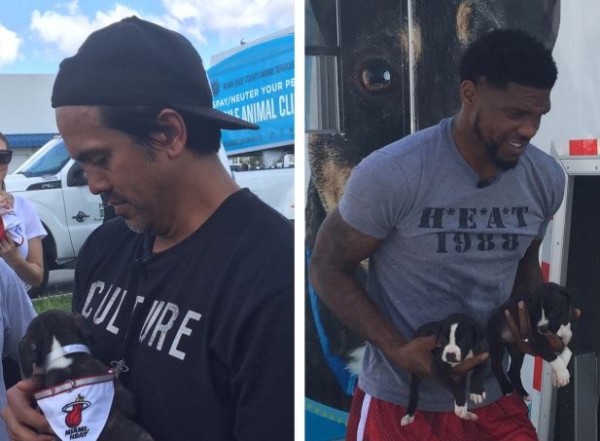 On Friday afternoon at Miami International Airport, the Miami Heat helped load 150 South Florida sheltered pets into crates so they could be flown to Oakland, Calif., where members of the Golden State Warriors were waiting to unload the pets.

Fed Ex plane with $11 mil in supplies for Irma victims has arrived. Will be loaded with pets to transport to Oakland pic.twitter.com/6f4NEubSzc

Friday’s event was a joint effort put together by the Heat, Warriors, and Federal Express. Coach Spoelstra was more than happy to take part in the event that aimed towards helping sheltered animals in the Miami area.

“There are so many areas that need help,” coach Spoelstra said. “This is an area that often gets forgotten, the displaced animals, and some of the horrific stories about animals getting left behind in the storm. Many of the animals would have been euthanized this weekend.”

Erik Spoelstra putting a Heat bib on one of the pups pic.twitter.com/S8htDPxwmF

Haslem, who was the only Heat player that stayed in Miami while Hurricane Irma wreaked havoc across South Florida, said he walked his own three dogs as much as he could during a storm that he was highly prepared for.

“It’s not that I don’t respect the power of Mother Nature because I have a tremendous amount of respect for Mother Nature,” Haslem said. “But I built a bunker. I paid a lot of money for it. I’m going down with my ship.”

On Friday, Haslem helped with the sheltered dogs before they embarked on their long flight from Miami to Oakland.

Udonis Haslem allowing one of the dogs to stretch its legs before the long flight to Oakland pic.twitter.com/HEb5obIcNN

Spoelstra and the Heat organization continue to be very active in the South Florida community, as the Arison family also helped pledge up to $10 million towards Hurricane Irma relief yesterday.

“I think we were all very fortunate with this storm but I think the numbers were roughly 7 million that evacuated. That was the smart thing to do,” Spoelstra said. “Once everybody is able to come back safely, now we all have to lace up our boots and get to work and build back this community.”