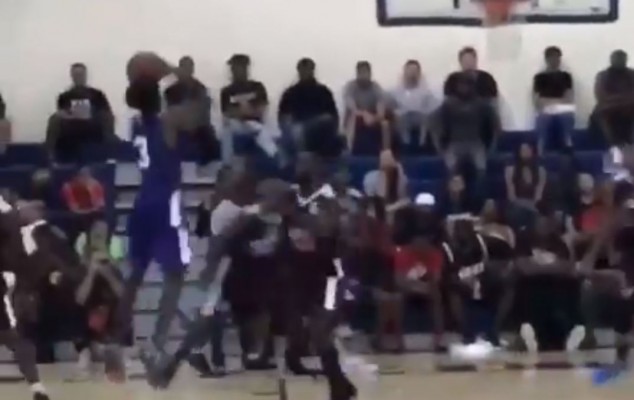 Dwyane Wade‘s 16-year-old son Zaire Wade is doing his best to prove that the apple hasn’t fallen very far from the tree.

On Tuesday night, the talented youngster went up against current NBA talent in a Miami Pro League game and held his own in impressive fashion.

In one video, the eldest son of the Miami Heat legend was recorded crossing up New York Knicks guard Tim Hardaway Jr., before getting separation and nailing an absolutely clutch fadeaway jumper.

Hardaway wasn’t the only NBA player on the court. He was joined by big man Andre Drummond and Dwyane Wade’s own teammate Hassan Whiteside. It’s quite impressive that Zaire Wade was not only able to keep up with the NBA athletes, but actually put on quite a show.

Thanks to this video, it’s clear that Zaire Wade has already learned quite a bit from his All-Star dad. With a couple more years left before he’s eligible to play in the NBA, it’ll be fascinating to see just how great this young baller can become.

While there’s no telling whether or not the Heat will be able to snag Zaire Wade in the future, nothing would be sweeter than seeing him carry on his family’s tradition of basketball excellence in South Florida.
[xyz-ihs snippet=”HN-300×250-TextnImage”]