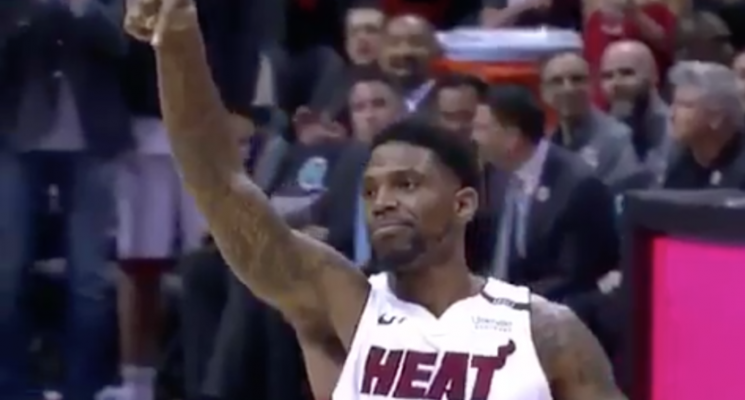 Miami Heat veteran Udonis Haslem doesn’t see much time on the court, but still manages to provide invaluable leadership to his teammates. In one of his rare forays onto the court on Wednesday night, he managed to make himself the center of attention in the closing seconds of the Heat’s blowout road win over the Atlanta Hawks by simply making a free throw.

The Hawks have a promotion in which fans at the game receive free food from Chick-fil-A, the Georgia-based fast food giant, if an opposing player misses consecutive free throws during the fourth quarter. With just 17.4 seconds remaining in a game and the Heat leading by 30 points, many fans might have been excused for having departed much sooner. However, Haslem went to the foul line and proceeded to miss his first free-throw attempt, heightening the excitement of his next effort.

As the video shows, Haslem’s next free throw went in and frustrated fans that had a hankering for some chicken. Haslem managed to twist the knife a little more by gesturing to them after making his shot, with his teammates enthusiastically cheering his success.

Later, Haslem took to social media, using that same video to revel in the moment:

Thought it was!! No free bees round here!!??‍♂️? #notonmywatch #og

While Haslem and the Heat have clinched their spot in the upcoming playoffs, they enter the final week of regular-season play with a precarious half-game lead for the sixth seed over two teams entering Thursday night’s action. Both the Washington Wizards and Milwaukee Bucks could potentially relegate the Heat to the eighth and final seed, which makes the team’s final three games important.
[xyz-ihs snippet=”HN-300×250-TextnImage”]