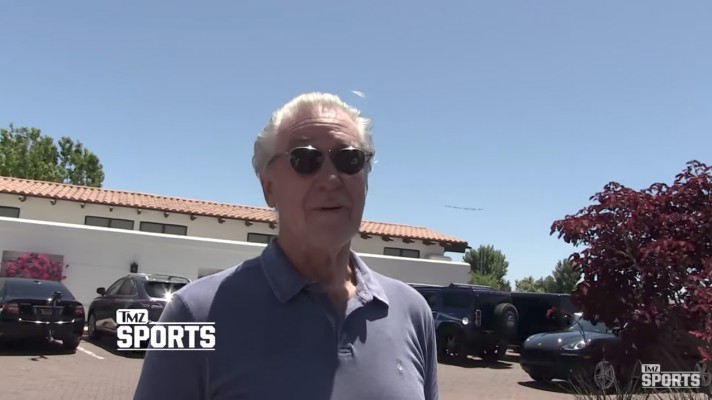 The chief architect of bringing LeBron James to Miami in July 2010 was Miami Heat team president Pat Riley. The move played a key role in helping the Heat reach the NBA Finals for four consecutive years from 2011-14, including championships in both 2012 and 2013. When James decided to return to play for his hometown Cleveland Cavaliers following the 2014 Finals, the relationship between the two was marked by criticism of the move from Riley.

Fast forward three years later and James is taking the Cavaliers to their third consecutive Finals, with all three of those matchups having come against the Golden State Warriors. James is now in rare territory as a player who’s managed to play in seven straight Finals, so celebrity website TMZ decided to ask Riley about the achievement on Saturday in Malibu, California.

Instead of actually commenting on James, Riley pointed out the accomplishment of one of his former players with the Los Angeles Lakers in Magic Johnson:

“The Lakers with Magic Johnson went to the Finals during Showtime nine times in 12 years,” Riley said before then answering a question about whether he was impressed by what James has achieved. “Yes I am, are you kidding me.”

When asked if he was rooting for James, Riley dodged the question and gave no hint to his actual rooting interest:

“I’d like to see a great Finals. I’m about a great Finals and I think it’s going to be one of the best ever,” Riley said. “But I love LeBron, we all do. He was part of our team for four years.”

The interviewer attempted to ask Riley one final question about whether Chris Bosh would play again, but no response was offered.
[xyz-ihs snippet=”Responsive-ImagenText”]