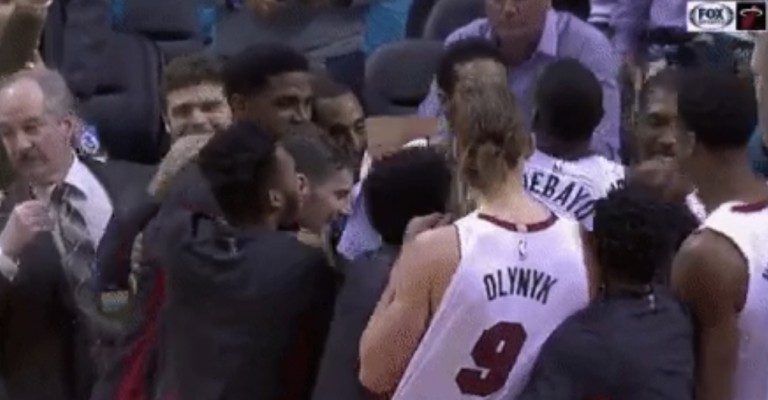 Without their team’s starting point guard, and facing a five-point deficit with just 34 seconds remaining, it looked as if the Miami Heat were on their way to a second straight loss.

However, the team had other plans on Saturday night, as they would pull off an incredible come-from-behind victory over the Charlotte Hornets.

Out of a timeout, forward James Johnson scored a quick bucket to bring the Heat to within three with just 34 seconds left on the clock. Then on the ensuing possession, guard Josh Richardson got an incredible steal off a Hornets inbound pass, which led to another bucket by Johnson, this one being a 3-pointer; and with 30 seconds remaining, the two teams were all tied up at 105.

The Hornets would go on to miss their next two shots, courtesy of some pestering defense by Richardson on the Kemba Walker. As the clock wound down, big man Kelly Olynyk grabbed the rebound, drove the length of the floor, and was fouled by Dwight Howard.

Olynyk would go on to sink one of two free throws with just .2 seconds remaining on the clock, and that was all she wrote.

The @MiamiHeat are HYPED after that unreal comeback victory! #HeatCulture pic.twitter.com/ljSlogAvhS

After all hope looked to be lost, the fact that the Heat prevailed in the end made the victory that much sweeter. The rolling Heat had a lot to celebrate after the game as they inch that much closer to third in the Eastern Conference standings.

Their schedule doesn’t get any easier as they face off against the Houston Rockets on Monday night.
[xyz-ihs snippet=”HN-300×250-TextnImage”]