Video: Miami Heat fan gets jumped in Las Vegas after yelling out ‘Heat Nation’ in front of Lakers fans 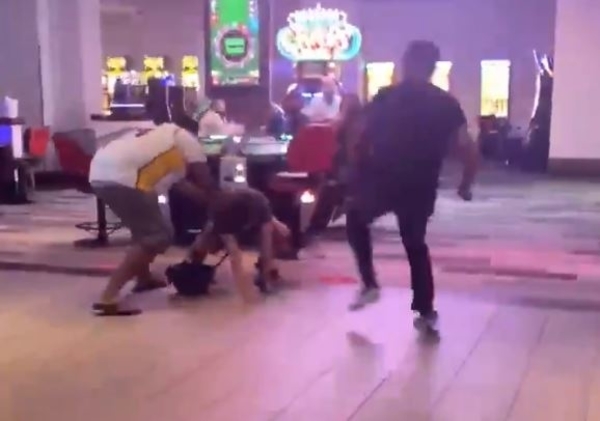 What began as a seemingly mismatched NBA Finals between the Miami Heat and the Los Angeles Lakers has become a very competitive series.

On Friday, the Heat, facing elimination, defeated LeBron James and company, 111-108, after turning back a strong L.A. rally late in the fourth quarter.

The testiness has spread to fans of both teams, as a small group of Lakers fans jumped a Heat fan at a Las Vegas casino.

Some punk ass Laker fans jumped and chased a Heat fan in Vegas last night for screaming “Heat Nation” was rooting for LeBron and company but not anymore. Anything to see those weak ass fans sad will make me happy now. pic.twitter.com/nwZfc5bn6E

When the championship series began, the Heat were cast in the familiar role of prohibitive underdogs, a sentiment that only strengthened after they lost the first two games.

But after winning Game 3 and then Game 5, there’s now a strong feeling, at least in South Florida, that the Heat have a real shot at winning the NBA championship.

All-Star Jimmy Butler is largely responsible for the change of complexion in the Finals.

He had a monster triple-double in Miami’s Game 3 victory, then repeated the feat on Friday.

If Butler continues to play at that level, and Miami’s young guns also play at a high level, the Larry O’Brien Trophy could be moving to South Florida just days from now.