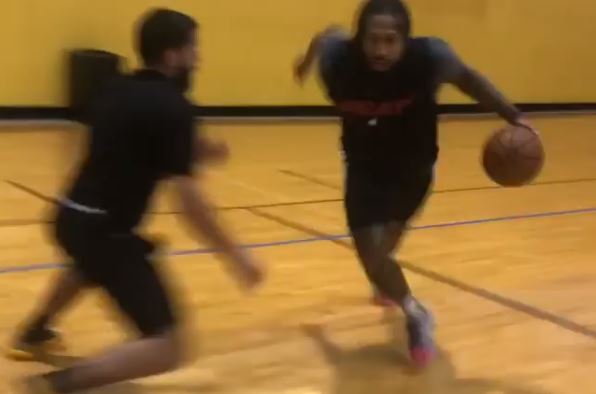 Miami Heat forward James Johnson appears to be nearly ready to once again take court based a on recent social media video. He has yet to see any action for the Heat thus far this season, with the team currently possessing a 3-4 record entering Saturday night’s game in Atlanta.

Johnson underwent sports hernia surgery in May after the Heat were eliminated in the first round of the NBA playoffs. The issue appeared to develop during the second half of the season and was likely the cause of the veteran’s inconsistent play and his sometimes-reduced explosiveness.

Rehabilitation was expected to take anywhere from six to 12 weeks, which would have made him available for the start of training camp. However, a slower-than-expected recovery caused a change in those plans, with the Heat choosing to make sure he is fully healthy in order to avoid creating a situation where he could possibly reinjure himself.

Prior to the start of last season, the 31-year-old Johnson signed a four-year contract with the Heat worth $60 million. By the end of the regular season, he had averaged 10.8 points, 4.9 rebounds and 3.8 assists in his 73 games.

Johnson originally signed with the Heat on July 10, 2016. When he does begin playing again, he’ll be starting his 10th NBA season, having played previously with four other teams.
[xyz-ihs snippet=”HN-300×250-TextnImage”]