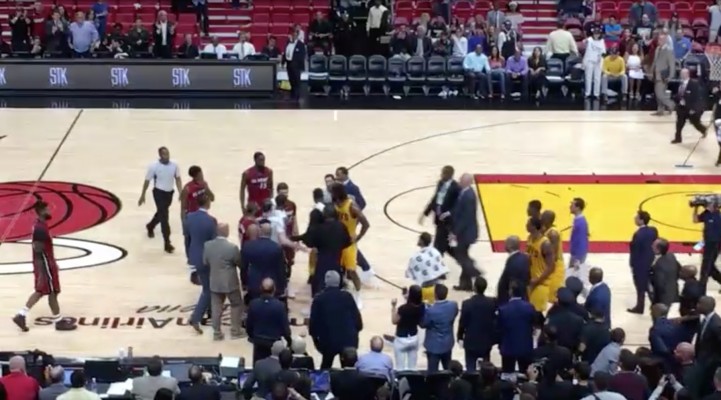 The Cleveland Cavaliers were blown out by the Miami Heat Saturday night, 120-92. Hours before game time, Cleveland head coach Tyronn Lue opted so sit LeBron James and Kyrie Irving for the night, which seemed to irk the Heat, as they really put it on the Cavs in this one.

Towards the end of the game, Rodney McGruder wrapped things up by dunking emphatically over Cavs forward Channing Frye, which Frye seemed to take exception to, because the pair got into it from there. J.R. Smith, who’s been inactive since December with a thumb injury, got involved as well.

The injured sharpshooter began jawing at McGruder from the bench in defense of his teammate, which resulted in both benches clearing. Smith, McGruder and Heat guard Dion Waiters all had to be restrained before the incident could get physical.

This incident will certainly make things a bit more interesting when these two teams go at it again in Cleveland on Monday.
[xyz-ihs snippet=”Responsive-ImagenText”]