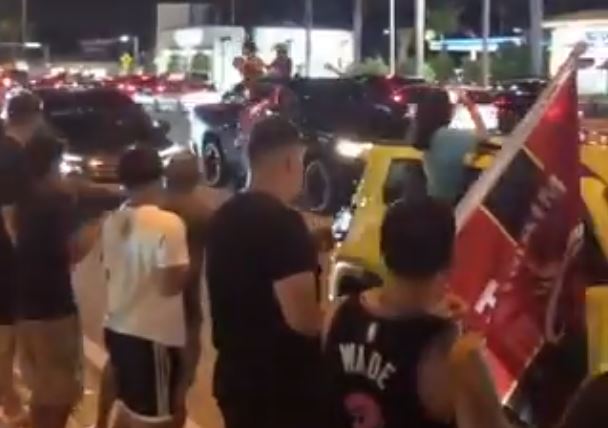 On Sunday, the Miami Heat continued an impressive, Cinderella-like run as they eliminated the Boston Celtics in Game 6 of the Eastern Conference Finals.

Now that their team will play in the NBA Finals, Heat fans have taken to the streets of South Florida to celebrate.

Things are picking up here in Hialeah #HEATWIN @MiamiHEAT pic.twitter.com/Lb6YG4QF3V

Miami seemed likely to make the playoffs this season once it acquired All-Star Jimmy Butler in a huge trade last summer.

But no one outside of the Miami area expected the team to do anything beyond appearing in the postseason.

Instead, the Heat rolled the heavily favored Milwaukee Bucks in the second round of the playoffs, then took care of the Celtics in the next round.

The Heat will have their work cut out for them if they’re to win their fourth NBA title, as they will have to overcome LeBron James, Anthony Davis and the Los Angeles Lakers.

If the Heat slow down the pace against L.A., and especially if young studs such as Bam Adebayo and Tyler Herro continue to impress, perhaps an even bigger celebration will be held in South Florida in a couple of weeks.

Featuredmiami heatNews Ticker
← Previous Story Video: Jimmy Butler discusses having to go through LeBron James-Led team to get to promised land
Next Story → Video: Tyler Herro claps back at Paul Pierce for refusing to call him a ‘bucket’