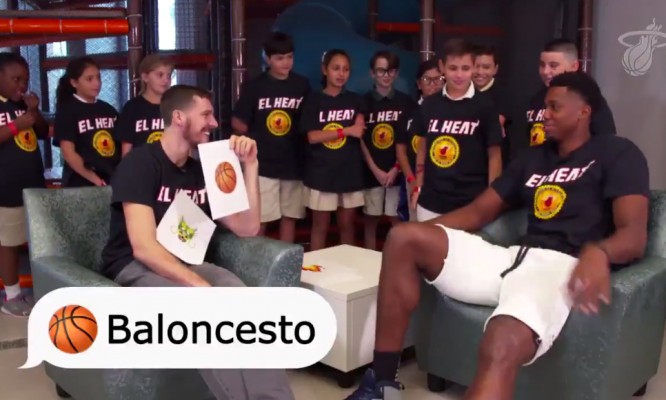 “He’s saying that he learned some Spanish so we are gonna put him on some test in Spanish,” Dragic began.

Whitside replied simply and to the point:

We know @YoungWhiteside has been working on his Spanish speaking skills… now it's time for @Goran_Dragic to put him to the test! pic.twitter.com/rlsL5ZHJF0

At one point in the video, Whiteside is stumped by a word and calls on the help of a group of boys and girls enjoying the test.

“Yeah I need a lifeline,” Whiteside says before a young boy comes to his assistance. “Ojos.”

With the massive Spanish speaking population that calls South Florida home, Whiteside’s interest in the language is surely to make him even more beloved by the Miami faithful.

The Heat look to improve on their 1-2 preseason record as they take on the Charlotte Hornets on Monday night at AmericanAirlines Arena.
[xyz-ihs snippet=”Responsive-ImagenText”]

FeaturedGoran Dragichassan whitesidemiami heatNews Ticker
← Previous Story Video: Dwyane Wade Explains in His Own Words Why He Chose Not to Sign With Heat This Season
Next Story → Video: Hassan Whiteside Mocks Kemba Walker for Flopping