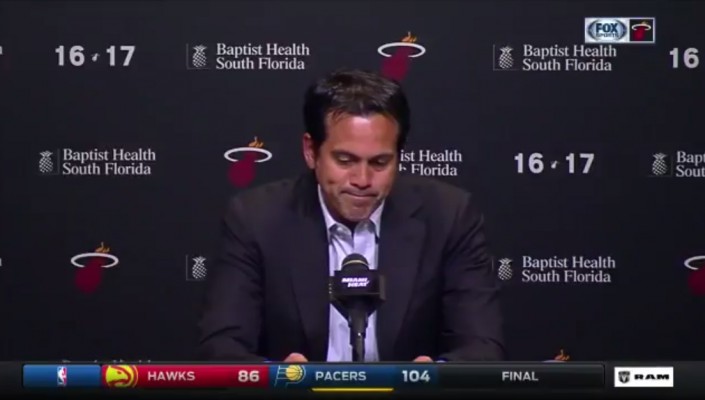 The Miami Heat is a franchise that has experienced it all. It’s been high, it’s been low and everywhere else in between. From years ending in championship parades down Biscayne Bay, to some brutal NBA Finals exits — it’s been there. From first-round playoff eliminations to lowly “lottery pick” seasons — it’s done that.

Heat head coach Erik Spoelstra has been there almost every step of the way, too. The once-and-former video analyst has led (or has helped lead) a myriad of Heat teams to varying levels of success and failure over the years. So then why does he seem more distraught than ever before?

“I don’t know if I’ve ever felt this way about a team before, or wanted something more for a team,” Spoelstra said in his final presser after Miami was eliminated from playoff contention on Wednesday night despite dismantling their final opponent, the Washington Wizards.

The fact is, no team has ever finished a season 30-11 or better and still missed the playoffs. It’s unheard of, unnatural, and to the entire Heat community, it just feels wrong.

It’s hard to believe a team that possessed the longest win streak (13) of any squad in the regular season will miss the playoffs entirely. It’s perhaps even harder to process the fact that, in the second half of the season, the only other teams with 30 wins besides the Heat were the two best teams in the league — the Golden State Warriors and the San Antonio Spurs. They finished as the one and two seeds in the West, respectively. Miami finished as the ninth seed in the East. This does not compute — at least not until we hark back to early January and remember this same Heat team was 11-30, and tied for the second-worst record in the NBA.

Talk about a roller coaster ride.

For a guy who will be considered in the NBA’s Coach of the Year conversation, he’s awfully perturbed he wasn’t able to lead his team to their ultimate goal — the NBA playoffs.

Still, in today’s sports world of instant gratification and “What have you done for me lately?” as the barometer for “success,” the one they call “Spo” should be holding his head high.

It’s hard to picture anyone else being dealt a worse hand before the season started, then going on to finish the way this Heat team did. Everyone within the organization, especially Spoelstra, should be proud of its unprecedented turnaround, because it’s something we may never see again — in all of sports.
[xyz-ihs snippet=”Responsive-ImagenText”]