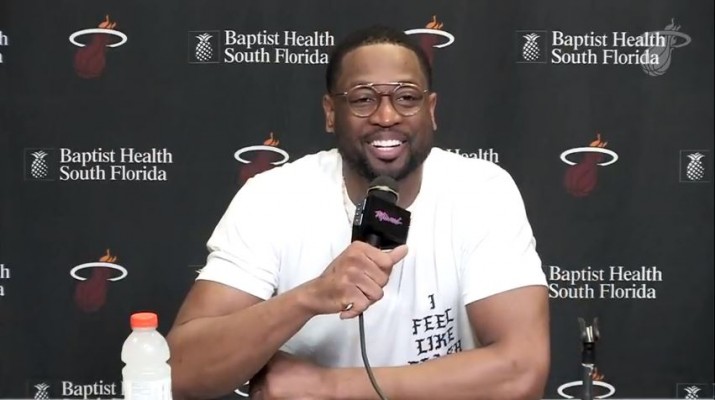 The return of Miami Heat icon Dwyane Wade to the team on Thursday sparked surprise from members of the Heat and a run on his jerseys from fans. That collective enthusiasm was enough to warrant the team having a Wade press conference on Friday morning.

Wade spoke about how he found out about what was at the time a pending deal:

“So, about 11:45 a.m. I left my house. I was headed into the practice gym in Cleveland. It was all day before we traveled so I was going to get some work in. And about 12 o’clock I got a text from my agent Leon Rose said ‘Calling me 9-1-1.’ I haven’t gotten a lot ‘911 call me now’ messages on the trade deadline throughout my career. So I knew it was something.”

The three-time NBA champion continued to discuss what Rose told him:

“At first it was the possibility of [the trade]. He told me about the conversation from Cleveland’s side. He said it was a conversation, something that was being talked about. Obviously I had to agree to it. And I definitely agreed to it. Then it went from there. From there, it was just kind of waiting to see how everything worked out and played [out]. So I decided to go and finish my day until I found out.”

During that wait, Wade and LeBron James had a farewell lunch:

“It was just me and LeBron at the practice gym. We had lunch planned,” Wade said. “So I said, ‘Well, since it finally happened and I’m going to Miami, let’s go have this last bad lunch. Because I’ve got to do body fat tomorrow.’ Let me go enjoy this food. I kind of had a sendoff lunch. And then I got on a plane and came here.”

The thrill of rejoining the Heat was felt by Wade prior to the morning shootaround:

“Walking in here this morning going to the trainers and then seeing my teammates come in, it’s all just happening fast,” Wade said. “But I was definitely shocked. At the same time, I was over-the-moon excited. So I definitely had a lot of different emotions. But it’s all working itself through my body right now.”

The 36-year-old Wade left the team to sign a two-year free agent contract with the Chicago Bulls in July 2016, then obtained a buyout last September from the team. He then signed with the Cleveland Cavaliers, who sent him to the Heat on Thursday in a whirlwind makeover of their team roster.

Wade is expected to come off the bench for the Heat in their Friday night game at American Airlines Arena against the Milwaukee Bucks.
[xyz-ihs snippet=”HN-300×250-TextnImage”]