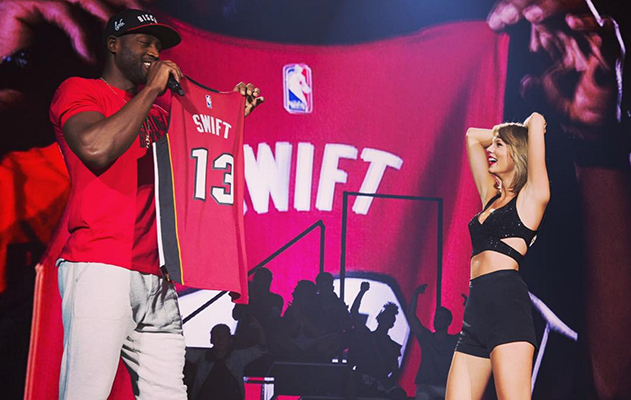 American singer and songwriter Taylor Swift visited AmericanAirlines Arena on Tuesday night as a part of her “1989 Tour” and it wasn’t even a question as to who needed to make an appearance.

Superstar Dwyane Wade of the Miami Heat officially welcomed Swift with a personalized No. 13 Heat jersey as her induction into the team.

Look who surprised Taylor at the @americanairlinesarena tonight

13 is her favorite number and it’s my 13th season starting 2morrow… #Lucky13 thank you @taylorswift for having me at your concert tonite and for allowing me to welcome you to Miami-WadeCounty!!! American Airlines Arena is insane right now… #heatnation #BiscayneBoys   A photo posted by dwyanewade (@dwyanewade) on Oct 27, 2015 at 6:22pm PDT

Hugging it out after the crowd screamed louder than I thought was humanly possible for @dwyanewade!!

Thank you @dwyanewade for giving me a 13 jersey and for welcoming us to Miami 1️⃣3️⃣ What an incredible evening, spent with incredible people. A photo posted by Taylor Swift (@taylorswift) on Oct 28, 2015 at 12:25am PDT