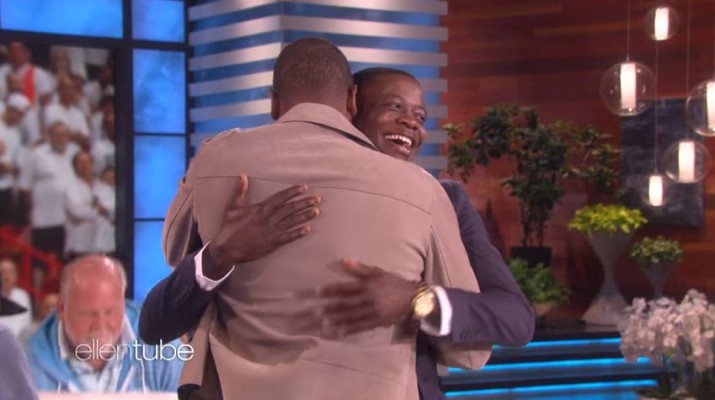 Miami Heat veteran guard Dwyane Wade has always been one of the most socially conscious NBA players and has made a huge impact beyond the court. As a role model, he embraces the fact that members of the general public consider him to be a hero, which is why he was able to turn the tables and honor a real-life hero during a surprise appearance on “The Ellen Show” with Ellen DeGeneres on Monday

That hero was James Shaw Jr., who was able to pull away a gun from a shooter who had killed four people at a Waffle House in Antioch, Tennessee on April 22, which helped avert a much larger tragedy. Shaw noted that his two favorite things were his daughter and basketball and was asked by DeGeneres who his favorite player was, with his response being Wade for a specific reason:

“I like the way he carries himself off the court,” Shaw said.

That was when Degeneres surprised Shaw by introducing Wade:

After Wade and Shaw embraced, they sat down and Wade discussed how Shaw was someone he would mention to his own children as both a hero and role model. DeGeneres mentioned that Wade had made a cross country flight to appear on the program after being asked.

Wade returned to play for the Heat in February after leaving the franchise in 2016 after playing the first 13 years of his legendary career with the team. While the possibility exists that the 36-year-old Wade could retire during the offseason, it appears to be clear that he’ll continue to have an impact off the court.
[xyz-ihs snippet=”HN-300×250-TextnImage”]