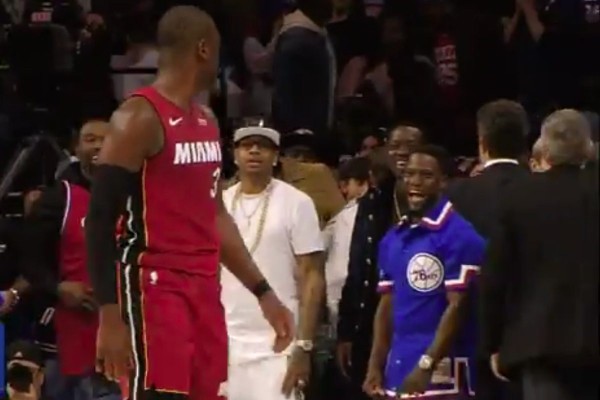 In helping the Miami Heat tie their playoff series with the Philadelphia 76ers on Monday night with a 113-103 victory, veteran guard Dwyane Wade scored 28 points in just 26 minutes of action. His final field goal of the night with just 47.9 seconds left in the game served as the dagger in the victory, with Wade savoring the moment by staring down comedian Kevin Hart, while former Sixers legend Allen Iverson could be heard offering an expletive-laced tribute to Wade’s effort.

"You a bad MF" Allen Iverson to Dwyane Wade as he stares down Kevin Hart after torching the Sixers ??

Hart, a native of Philadelphia, spent most of the game trash-talking Wade and his teammates while adorned in a 76ers warmup jacket. Over the final five minutes of the game, the comedian and Iverson watched Wade almost single-handedly hold off a Philadelphia comeback by collecting a clutch steal, an important assist and an offensive rebound that ate up more of the clock with Miami holding an eight-point lead. Then came Wade’s kill shot that made it 106-98 in favor of the Heat.

It was Wade’s insertion into the game in the first half that helped change the momentum of the game. The 76ers had led 29-22 after one quarter, but the Heat then roared back to outscore their hosts 34-13 in the second period. Leading by as many as 16 points in the early portion of the final quarter, Miami watched their lead dwindle to just two before Wade’s late heroics.

The next two matchups in this seven-game series will take place at American Airlines Arena, with Game 3 tipping off on Thursday night just after 7 p.m. The game will be nationally broadcast on TNT.
[xyz-ihs snippet=”HN-300×250-TextnImage”]