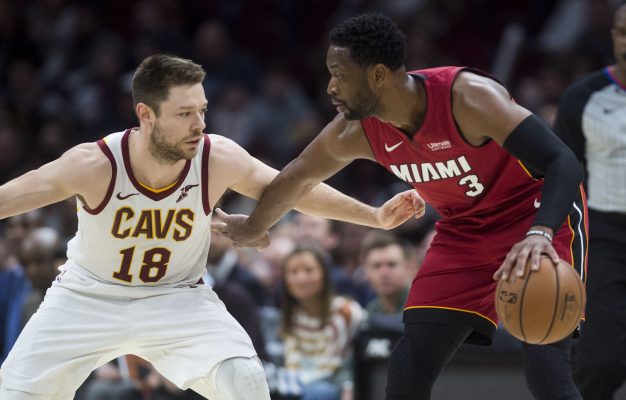 Despite the fact that Miami Heat guard Dwyane Wade played in just 46 games for the Cleveland Cavaliers, he has warm memories of his time in the city, including interactions with the team’s fan base.

He reflected on his thoughts after he had played his final game in Cleveland on Friday night, a contest that included a video tribute to the future Hall of Famer during a first-quarter timeout.

D-Wade reflects on his brief time in Cleveland. pic.twitter.com/7seiIUHuRJ

“Yeah, it was great. Lot of fan support coming here, maybe besides the one year we came back here. But besides that, the fans have always been great. Obviously, my four months here, I got a chance to get into the community, got a chance to get to know some of the fans, a lot of people here in Ohio, so it was definitely cool.”

In referencing that one year in which that fan support in Cleveland wasn’t as positive, Wade was no doubt indicating the 2010-11 season. That was the first season after his close friend and former teammate LeBron James returned to Cleveland after notoriously telling a national audience that he was “taking his talents to South Beach.”

The free agency move enraged the Cavaliers fan base, though that anger subsided when James returned to the team in 2014.

Wade began his brief tenure with the Cavs in September 2017, just after receiving a buyout from the Chicago Bulls. At last year’s February trade deadline, Wade was then traded back to the Heat and announced in September that this would be his final NBA season.

The 37-year-old Wade played 28 minutes in Friday’s 100-94 Heat victory, scoring 13 points, grabbing six rebounds and dishing out three assists. The win was sparked by a third-quarter outburst that saw the Heat outscore the Cavs 32-17 after trailing by five at the half.

Entering Sunday night’s road game at Madison Square Garden against the New York Knicks, the Heat’s record now stands at 23-24 on the year. They currently have the seventh-best record in the Eastern Conference, one half game ahead of the Charlotte Hornets.
[xyz-ihs snippet=”HN-300×250-TextnImage”]