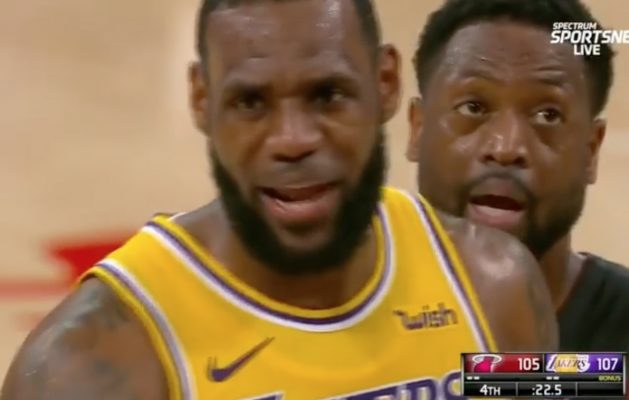 The last on-court meeting between Miami Heat guard Dwyane Wade and his close friend, Los Angeles Lakers forward LeBron James, had a little humor attached to the final moments of the tight contest on Monday night.

That came when Wade suggested to James that he miss a free throw late in the game in order for Wade to have the opportunity to offer up a game-winning shot.

The Heat were down 2 with LeBron at the line, so D-Wade politely asked Bron to miss ?

The Lakers defeated the Heat 108-105 after James ignored Wade’s request and then connected on both of his free throws with 22.5 seconds left. Wade did end up attempting what would have been a game-tying 3-pointer with 7.2 seconds left, but it came up short to drop the Heat to 11-15 on the season.

Wade is in his 16th and final season of a legendary career that will ultimately culminate with an induction into the basketball Hall of Fame. He and James were among the top selections in the 2003 NBA Draft and have forged a tight bond over the years, which included playing together for four seasons with the Heat from 2010 to 2014 and with the Cleveland Cavaliers last season. The Heat era was a memorable stretch that saw the team reach the NBA Finals each year and capture league titles in both 2012 and 2013.

Monday night’s matchup marked the 31st time that Wade and James had faced off against each other, with James barely edging his close friend with a 16-15 edge.
[xyz-ihs snippet=”HN-300×250-TextnImage”]