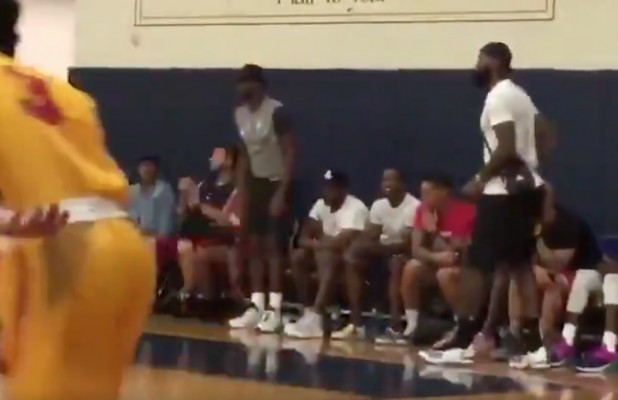 Having good genes offers some developing basketball players, like the son of Miami Heat guard Dwyane Wade, a leg up on following in the footsteps of their famous parents. Zaire Wade is making every effort to take advantage of the potential passed on by his father and is also showing the elder Wade’s knack for connecting in the clutch.

At the Las Vegas Fab 48 on Thursday, Zaire Wade drilled a key shot, which resulted in an enthusiastic reaction from both his father and Dwyane Wade’s close friend, LeBron James:

The Fab 48 is a four-day event that concludes on Sunday, bringing together many of the best high school players in the country. The fact that the 16-year-old is among this select group is indicative of his potential on the court, though his abilities first began to be noticed during his middle school years. As a 6-feet-2 point guard with excellent shooting range, he’s expected to be inundated with scholarship offers from major schools over the course of the next year.

James’ own son, LeBron James Jr., is also developing into a standout player. Just 13 years old, the younger James has already received scholarship offers from colleges and has been a regular on the AAU circuit for years. The elder James is now a member of the Los Angeles Lakers, with the possibility existing that the two might someday play on the same court, or even the same team, at some point in the future. In contrast, the likelihood of Wade and his son doing the same is virtually non-existent, given the elder Wade’s current consideration of retirement.
[xyz-ihs snippet=”HN-300×250-TextnImage”]

dwyane wadeFeaturedlebronlos angeles lakersmiami heatNews Ticker
← Previous Story Dwyane Wade Reacts to Incredible Video Showing Him and His Son Playing Together in NBA
Next Story → Video: Dwyane Wade Balls Out in Pickup Game With His Son