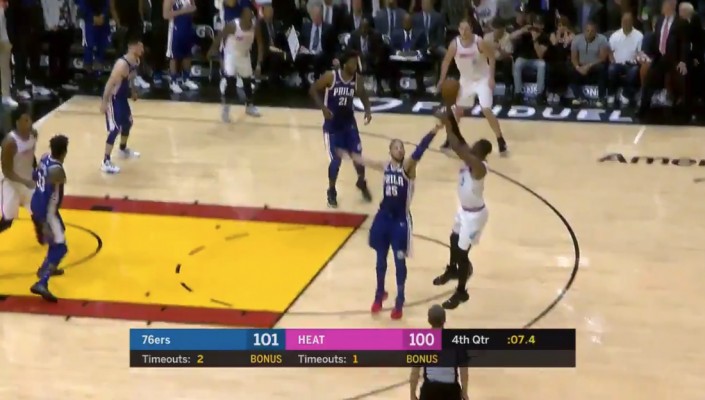 Dwyane Wade is back!

While he has been a member of the Miami Heat for over two weeks, a packed American Airlines Arena watched the NBA icon turn back the clock on Tuesday night when he capped off a masterful fourth-quarter performance with a game-winning shot against the Philadelphia 76ers.

The Heat had been down for much of the game, but managed to claw back in the final minutes. When 76ers star rookie Ben Simmons went 1-of-2 from the free-throw line, the Heat had an opportunity to take the lead in the waining seconds of the game.

Leading up to the last-second shot, Wade had put on a dominant display, scoring 13 points in the final frame. Just as Wade had done all quarter, he rose to the challenge in the final moment as well. With the clock ticking down, he stepped back for a 21-foot jumper, and sealed the 102-101 victory.

While he is no longer the kind of player fans had enjoyed for over a decade during his first stint with the team, everyone in the arena watched a vintage Wade win it for the Heat on Tuesday night.

Hopefully there are a few more moments like this to be had before the Miami legend hangs it up for good.
[xyz-ihs snippet=”HN-300×250-TextnImage”]