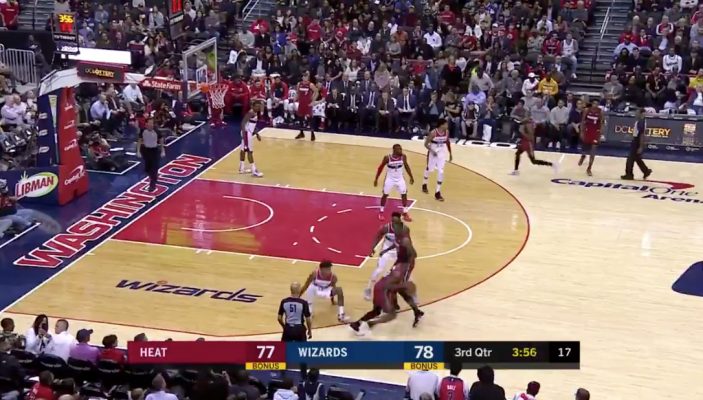 Miami Heat shooting guard Dwyane Wade may be 36 years old, but he’s still got plenty left in the tank.

That was evident on Thursday night as he dropped forward Kelly Oubre Jr. of the Washington Wizards with a crafty spin move.

Dwyane Wade is 36 years old and as crafty as ever. It’s gotta be the vino. ?(via @MiamiHEAT( pic.twitter.com/37WHslTi4X

He proceeded to find Rodney McGruder under the basket for the easy bucket.

Wade announced before the start of the season that this would be his final year playing basketball in the NBA in what he’s deemed his “One Last Dance.”

The three-time NBA champion started the season off with nine points and 11 rebounds in a loss to the Orlando Magic.

Wade and the Heat will look to redeem themselves with a victory against the Washington Wizards on Thursday night.
[xyz-ihs snippet=”HN-300×250-TextnImage”]