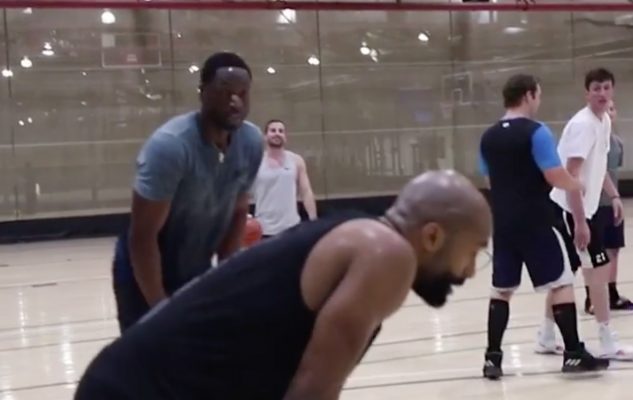 Miami Heat veteran guard Dwyane Wade long ago established a strong bond with his local fan base, a connection that appears to expand far beyond the borders of South Florida. A key facet of the future Hall of Famer’s popularity has been his approachable nature, which he showed off when he accepted a social media request from a fan in New York about playing basketball.

Wade was in New York City at the time and used Twitter on Wednesday morning to try to find an available pickup game.

Where the local hoopers at NYC???!?!? The after work hoopers??‍♂️

Just 44 minutes after Wade’s request went out, he received an invitation from a fan, Brian Poliakoff, to come to Chelsea Piers Fitness later in the day. A few hours later, Poliakoff penciled in Wade to play, though Wade offered no public assurances in the interim that he would actually make it. However, social media was used once again to document that Wade did indeed compete in the pickup action.

Ok @DwyaneWade – I’m ready to hoop at Chelsea Piers and have you down as 1 of my 5. Lets go! #NBATwitter pic.twitter.com/k9m2Q04M75

As expected, Wade dominated his amateur competition and managed to deliver some trash-talking along the way.

Wade has yet to come to a final decision about whether or not to play in his 16th NBA season. He had previously indicated that if he does sign with an NBA team, it would only be with the Heat. A reported lucrative offer to play for a Chinese professional team was also made in July, with retirement still a possibility. Still, the fact that Wade is willing to compete against any and all comers indicates that he still has the fire to play.
[xyz-ihs snippet=”HN-300×250-TextnImage”]