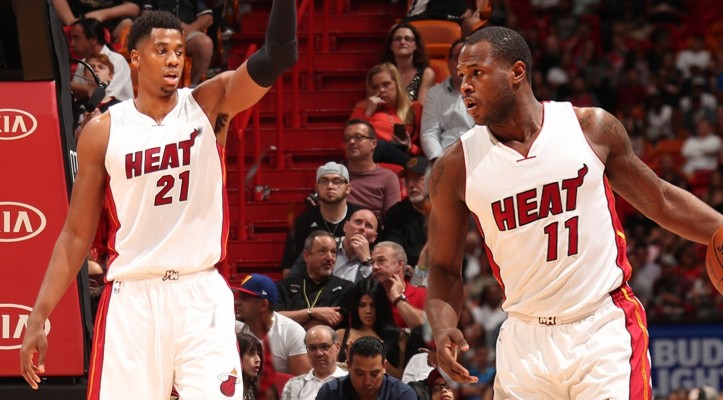 The 2017-18 season for Miami Heat guard Dion Waiters came to an end in January after the lingering effects of a left ankle injury required surgery and an extended rehabilitation period, limiting him to 30 games for the year. The fact that the Heat’s playoff opponent this year was the Philadelphia 76ers made his inability to play doubly painful because the City of Brotherly Love happens to be where Waiters grew up and where his family still resides.

Waiters appeared on ESPN’s morning program “Get Up” on Friday and spoke on a variety of topics. At approximately the 4:25 mark, Waiters talked about his frustration in being sidelined for that particular series and also about the controversies that continue to dog his teammate Hassan Whiteside and how the big man should approach them in the future:

With regard to Whiteside, some reports indicate that the Heat are seeking to trade him. However, the combination of his inconsistent play and contract that will pay him a total of over $50 million through the next two seasons hasn’t created much of a market.

The 26-year-old Waiters was the fourth player selected overall in the 2012 NBA draft by the Cleveland Cavaliers, but was dealt to the Oklahoma City Thunder in January 2015. He first joined the Heat as a free agent on a one-year deal in July 2016 before then re-signing with them last July on a four-year deal that could have paid him a maximum of $52 million. However, certain conditions regarding his amount of playing time had to be met in order to be paid the full amount due for the year, which ended up costing him money this past season. Despite the fact that the Heat’s training camp doesn’t open until late September, it remains unknown whether he’ll be fully recovered from his injury.
[xyz-ihs snippet=”HN-300×250-TextnImage”]