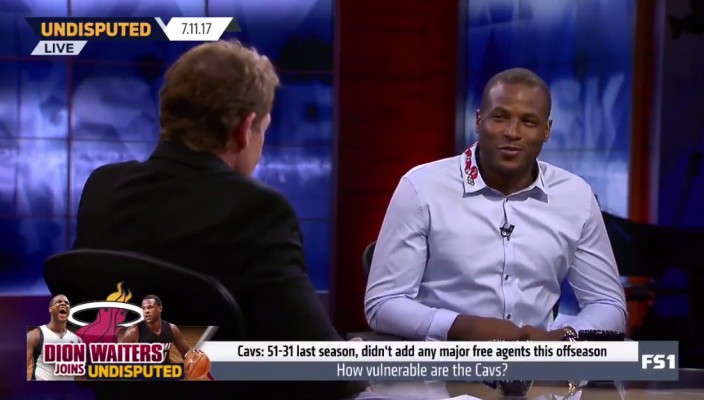 As the NBA offseason continues, players and fans alike can’t help but look forward to the upcoming matchups that will ultimately decide the next NBA champion. On Tuesday, Miami Heat‘s Dion Waiters joined Fox Sports’ “Undisputed” to discuss the Heat’s place in the Eastern Conference. According to Waiters, the Heat may very well be the class of the East.

When co-host Skip Bayless asked Waiters who he believes would win in a playoff matchup between the Heat and Cleveland Cavaliers, the five-year pro didn’t mince words.

“I like our chances against anybody over seven games,” Waiters said. “We just different man, we dogs. We’re a bunch of dogs. That’s it. We come from the jungle. That’s our motto.”

Waiters went on to explain his confidence.

“Our lineup, our chemistry is just different. We got a bunch of guys who do every little thing. James Johnson plays one through five. We got Wayne Ellington. We got J-Rich (Josh Richardson), Justise Winslow. We got Kelly Olynyk now. We got Bam (Adebayo) here,” he told Bayless and co-host Shannon Sharpe. “Of course you got me, you got the dog. So I like our chances against anybody, and I should feel like that because I know what we can do.”

See what else Waiters had to say below:

"I like our chances against anybody over 7 games…We are a bunch of dogs." — @dionwaiters3 on dethroning the Cavs in the East pic.twitter.com/GAvy7CzGsn

Waiters’ confidence shouldn’t be that surprising to anyone. As he mentions earlier in the interview, the Heat won the regular season series against the Cavs three games to one last season. With the Cavaliers struggling to make a splash this offseason, and the Heat only getting stronger, a shift of power in the East could be on the horizon.
[xyz-ihs snippet=”HN-Native-EndofArticle”]