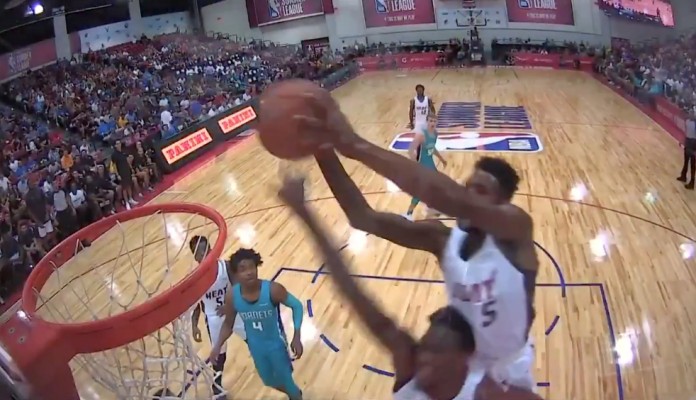 As a member of the Miami Heat‘s Las Vegas Summer League team, Derrick Jones Jr. is seeking to stand out after having signed a new contract with the team less than a week ago. He accomplished that in one way on Sunday afternoon with a thundering dunk against the Charlotte Hornets on a putback off a teammate’s shot. That was one of three slams on the day for a player the team originally signed to a two-way contract last Dec. 31.

Derrick Jones Jr. doing what he does best! #NBASummer pic.twitter.com/qc6apS0XV9

The 21-year-old Jones was especially motivated, considering the locale. He played collegiately at the University of Nevada, Las Vegas. That contract also offers him some incentive, having earned a standard deal after playing just 14 games with the Heat, averaging 3.7 points and 2.4 rebounds

The dunking ability of Jones has always been one of the most attention-getting aspects of his game, with his dunk on Saturday recalling his effort during the dunk contest during the 2017 NBA All-Star Weekend. In that instance, he was representing his team at the time, the Phoenix Suns, and managed to leap over four teammates. However, he ended up losing that year’s title to Indiana’s Glenn Robinson III.

Unfortunately for Jones, that figures to be his only highlight of this short 12-day offseason schedule after he injured his right ankle later in that first quarter and had to be helped off the court. The Heat ended up losing to the Hornets by a 94-90 score. Summer League play concludes on July 17.
[xyz-ihs snippet=”HN-300×250-TextnImage”]