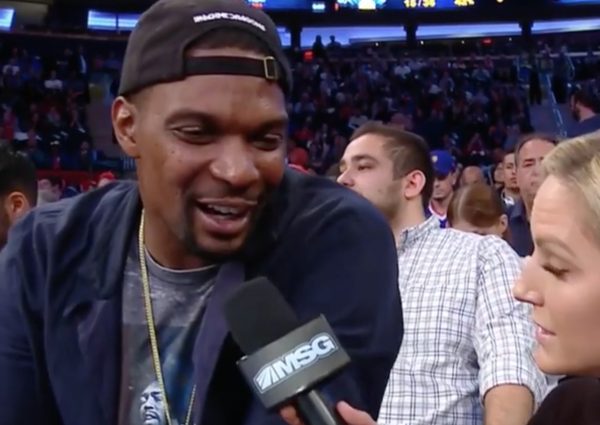 Despite not having played in any NBA games since February 2016 because of continuing health concerns, former Miami Heat forward Chris Bosh apparently hasn’t given up his dream of making a comeback. He made clear that he still hasn’t officially declared his career to be at an end.

Bosh was interviewed during Monday night’s preseason game between the New York Knicks and Washington Wizards at Madison Square Garden:

Chris Bosh says he’s not retired and is eyeing an NBA comeback. ?

“I have to remind people that I’m not retired yet, I haven’t made up my mind,” Bosh said. “Basketball is still in my heart and and on my mind. You know, that’s one of the main things that I’m trying to get back to, so I always have to tell people that I’m still going.”

After reporting to the Heat’s 2016-17 training camp, Bosh failed the team’s physical. By the end of that season, he and the team came to an agreement in which the team would release him from its roster, but pay him the remaining money due on his contract. The NBA ruled that his health issues were considered a career-ending illness, which allowed the team to remove his contract from its salary cap.

The main reason why the Heat and every other NBA team have declined to sign the 11-time All-Star is because of the parallels between his situation and that of the late Hank Gathers.  In March 1990, Gathers collapsed on the court during a conference tournament game and later died that night.

Regardless of whether Bosh does make a comeback, Heat fans will have the lasting memory of his contributions to the franchise’s two NBA championship teams in 2012 and 2013. Those titles came in the midst of four consecutive trips to the finals.
[xyz-ihs snippet=”HN-300×250-TextnImage”]