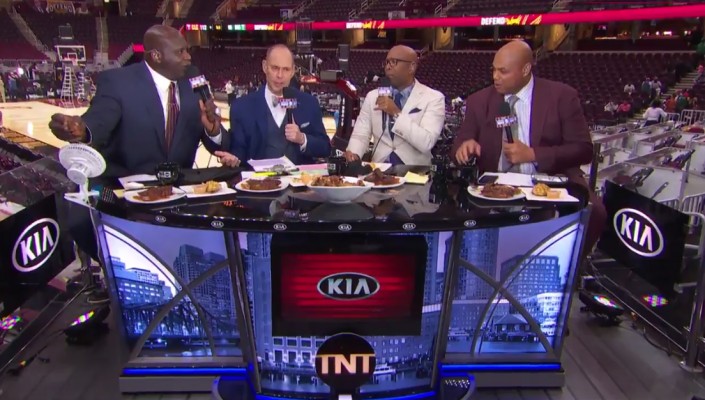 Charles Barkley and Dwyane Wade have not been on good terms for many years. But during last night’s NBA on TNT broadcast, Barkley changed his tune completely.

The comment came during a heated, but somewhat funny, argument between former Miami Heat center Shaquille O’Neal and Barkley:

During the exchange, Barkley refused to give O’Neal credit for any of his four championships, including the one he won in 2006 with Miami. Here is the exchange, courtesy of Ira Winderman of the Sun Sentinel, as host Ernie Johnson and analyst Kenny Smith patiently wait in the middle:

O’Neal: “Chuck, you have no idea what we’re talking about because you’ve only been to the Finals once.”

Barkley: “I wasn’t riding on Dwyane Wade’s and Kobe’s coattails.”

O’Neal: “It doesn’t matter, Chuck. I got the same thing you got and I passed you up 10 years ago.”

Barkley: “If I had been riding on Kobe’s coattails and Dwyane Wade’s and Alonzo Mourning’s too, I forgot about him, and Rick Fox.”

O’Neal “People question why you’re in the Hall of Fame anyway, bum.”

Johnson: “Why did that get so personal when we’re talking about Game 5?”

O’Neal: “Because Chuck keeps interrupting me. Don’t interrupt me, Chuck, or I’m gonna punch you right in your face, I’m telling you.”

For the record, Wade was definitely the best player on the roster during the 2006 championship run. He averaged 34.7 points, 7.8 rebounds and 3.8 assists per game, far better than O’Neal’s 13.7 points and 10.2 rebounds per game.

Barkley giving Wade credit was surprising though because just a couple months ago the Chicago Bulls guard had stepped up to defend former teammate LeBron James from Barkley’s criticism:

“Sometimes,” Wade said in January, “when guys get a microphone in front of their face, they just talk and talk and talk and forget about their history. We all make that mistake, especially that guy on TV (Barkley), he’s acting like he just walked on water. I like the fact that ‘Bron called him out and told him about himself a little bit. Humble yourself. LeBron is who he is, we all have flaws, but when your flaws are a little bit more, you should shut up.”

Wade and Barkley used to star in hilarious T-Mobile commercials together (like this one) but the two have not been on great terms since the Big 3 era started in Miami.
[xyz-ihs snippet=”Responsive-ImagenText”]