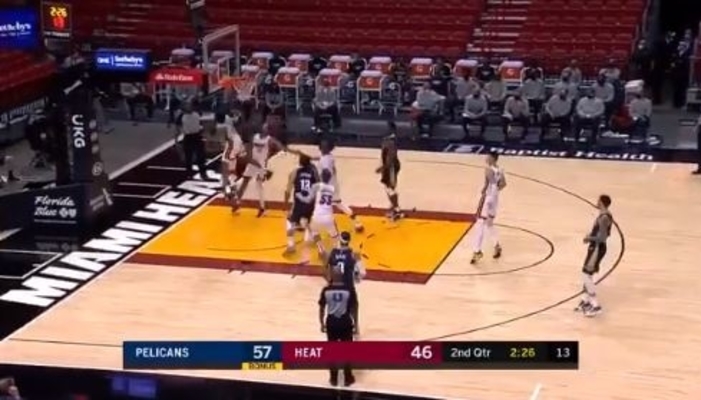 On Monday, the Miami Heat took the floor for the first time since their NBA Finals defeat in October for a preseason game against the New Orleans Pelicans.

Pelicans star Brandon Ingram came out aggressive, and late in the second quarter, he threw down a monster dunk on Heat forward KZ Okpala.

Ingram had a sterling 2019-20 season, as he was named to his first NBA All-Star team and won the league’s Most Improved Player award.

Even though he stands at a somewhat modest 6-foot-7, the Duke University product has a long wingspan which allows him to get his shot off easily and finish strong around the hoop.

On Monday, Ingram put up 16 points in the first half against Miami.

After losing the NBA title, the Heat are hoping for a repeat trip to the championship series this season. The roster looks largely the same, but the team is looking for internal improvement from players such as Bam Adebayo, Tyler Herro and Kendrick Nunn.

Brandon IngramFeaturedmiami heatNews Ticker
← Previous Story Dwyane Wade blown away by Stephen Curry as he makes his return to the court
Next Story → Video: Miami Heat’s Tyler Herro suffers blow to face in matchup vs. Pelicans