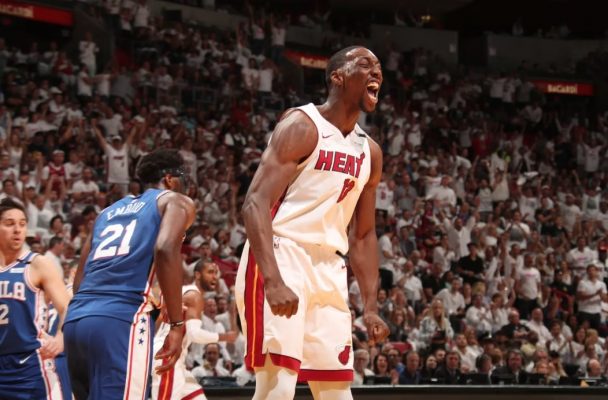 During Alonzo Mourning‘s Hall of Fame career, he spent years with the Miami Heat and established himself as a franchise legend.

That stature gives him credibility with respect to the statements he made on Wednesday about the future prospects of current Heat center Bam Adebayo.

You may think we hype up @Bam1of1 too much…but if you won’t listen to us, LISTEN TO ALONZO MOURNING! ? #HeatNation #KempJordan pic.twitter.com/bf5pfvAmyV

“Obviously a phenomenal talent,” Mourning said when asked his opinion of the second-year big man. “He came into the league at 19 years old, you know, so the sky’s the limit for his potential of being the best player on this team someday, which I feel he will be, simply because of his work ethic.

“I judge a person by their work ethic. He already has the skills, but his work ethic is off the charts. So, I know that he’s gonna be the best player in our organization. He will lead our franchise one day to the promised land.”

Adebayo was the 14th overall selection in the 2017 NBA Draft and offered solid hints that he could compete in the NBA last season. In 69 regular season games, he averaged 6.9 points, 5.5 rebounds and 1.5 assists per game in 19.8 minutes for each contest.

Mourning began his career playing three years in Charlotte before then joining the Heat after the 1994-95 season. In 593 regular season games over 11 seasons with Miami, he averaged 16.0 points, 8.1 rebounds and 2.7 blocks per game. During the 2005-06 season, he was a part of the team that won the first of the franchise’s three NBA championships.

It was after Mourning’s seventh season with the team in 2002 that his career appeared to be over due to kidney problems. Sitting out the following year, Mourning returned to play 12 games for the then-New Jersey Nets and in December 2004, was dealt to the Toronto Raptors, who released him two months later.

On March 1, 2005, he re-signed with the Heat and then retired for good after playing 25 games with them in the 2007-08 season. In 2014, he was inducted into the basketball shrine in Springfield, Mass.

Adebayo had been mentioned as one of the possible candidates to be dealt as part of the trade discussions for disgruntled veteran Jimmy Butler. However, that’s not likely to happen, given the potential that Adebayo has already shown and the fact that one of his biggest champions happens to be working for the Heat.
[xyz-ihs snippet=”HN-300×250-TextnImage”]