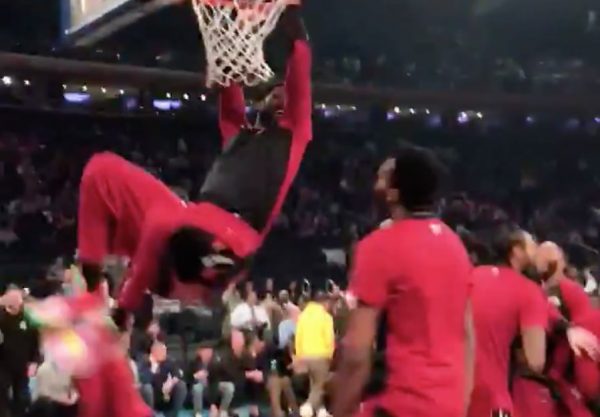 Miami Heat guard Dwyane Wade may not have the explosiveness that he was famous for in his NBA prime, but the 37-year-old can still bring the excitement, even in pregame warmups.

He showed that before Sunday night’s game against the New York Knicks at Madison Square Garden.

Heat reporter Jason Jackson captured that fantastic pregame moment as Wade threw the ball off the backboard and slammed it home with two hands. The rest of his Miami teammates were clearly happy to see that the veteran still has hops.

Wade’s victory lap around the NBA continued on Sunday night. However, it was actually Carmelo Anthony — who sat courtside by the Heat bench — who received a tribute video from the Knicks.

Wade and the Heat have one more meeting at MSG on March 30, where the New York faithful will certainly give Flash a proper send-off.
[xyz-ihs snippet=”HN-300×250-TextnImage”]

dwyane wadeFeaturedmiami heatNews Ticker
← Previous Story Dwyane Wade Speaks on the Love He Still Has for City of Cleveland
Next Story → Video: Derrick Jones Jr. Goes Down With Gruesome Knee Injury vs. Knicks