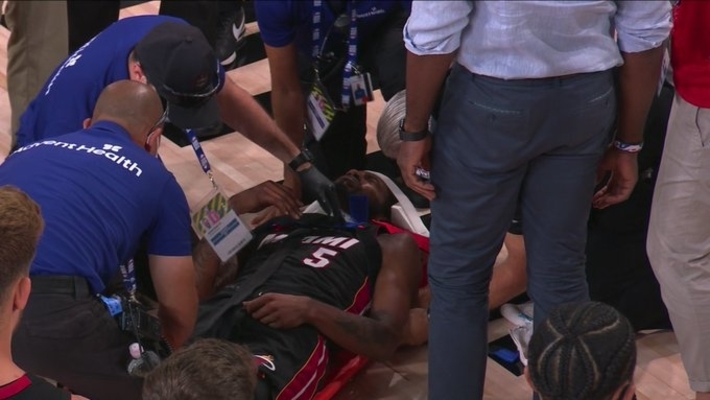 During Friday’s game between the Miami Heat and Indiana Pacers, Heat forward Derrick Jones Jr. had to be taken off the court on a stretcher after suffering a hard hit.

Heat‘s Derrick Jones Jr being put on a stretcher here at the Miami-Indiana game. Hit the court hard and was holding his neck after. Has been down for several minutes. pic.twitter.com/nRoXVYLJHN

He was on the floor for several minutes before he was finally taken off the court by medical staff.

Heat forward Derrick Jones Jr. got caught on a screen by Pacers center Goga Bitadze & went down hard. He hasn’t gotten up in a few minutes. He’s being looked at by Miami’s medical staff, and a stretcher is being brought out to the court. Appeared to get hit in head/shoulder area.

Jones has been a solid player for the Heat this year. On the season, he’s averaging 8.6 points and 4.0 rebounds per game.

The hit was certainly a scary one and is not something that basketball fans are used to seeing.

Hopefully, Jones is able to get the medical attention he needs and will be back on the court soon.

Jones had recorded three points, two rebounds, two assists and two steals before he was taken out of the game.