Don't Miss
Home / Videos / Meyers Leonard Destroys Jordan Clarkson in Beer Drinking Contest: ‘Get Him the F–k Out of Here’

Meyers Leonard Destroys Jordan Clarkson in Beer Drinking Contest: ‘Get Him the F–k Out of Here’ 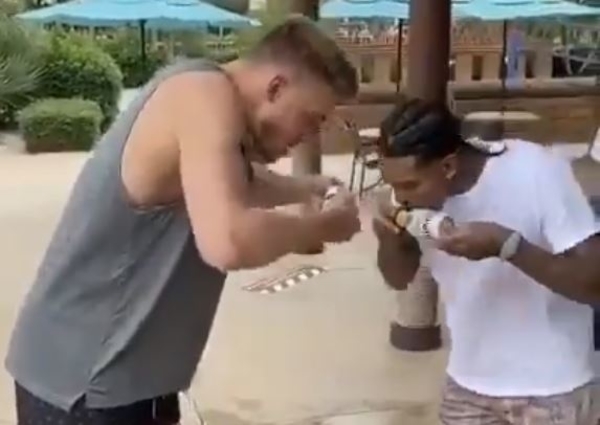 The spirited drinking game was recorded on video from inside the NBA’s bubble in Orlando, Fla.

Leonard then proudly posted the video to his own Twitter page.

I was drinking baby cans? No problem. 16oz might have been easier. Ain’t nobody competing with me. 🤝🔨 @NBABubbleLife pic.twitter.com/eiAMyjRHmF

With just under two weeks to go until the 2019-20 NBA season starts back up, there is no doubt that players are looking for ways to keep themselves busy and entertained.

It’s not a huge shock that drinking beers seems to be on the list of preferred activities.

After all, the makeshift campus at Walt Disney World Resort is probably the closest thing to a college campus experience that these players have had since their glory days of being basketball stars on campuses all over the country.

As for Leonard, he would be wise to find a way to burn off any of calories he has consumed from chugging beer. The Heat are famous for their strict rules when it comes to player fitness, and it’s not likely that the unique nature of the 2019-20 season restart is going to change any of that.

In the end, it’s great to see that Leonard’s intensity is alive and well. Surely that spirit will come in handy when Miami starts its season back up.

The Heat’s first game will be on Aug. 1 against the Denver Nuggets.