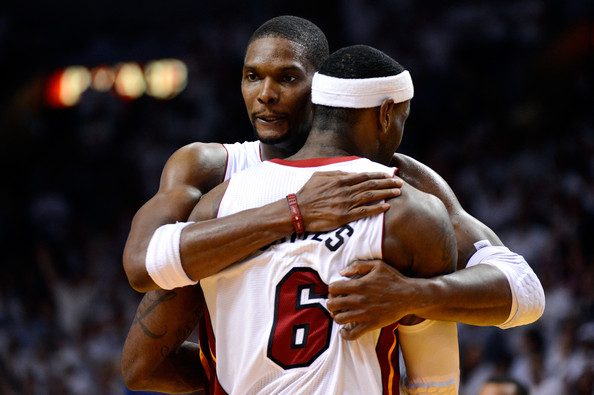 Despite the disappointing loss to the Orlando Magic, Tuesday night was a special one for the Miami Heat as they retired Chris Bosh’s No. 1 jersey in an emotional ceremony.

Following a Los Angeles Lakers’ win over the Washington Wizards on the same night, former Bosh teammate LeBron James admitted that he considered skipping his own game to attend his close friend’s special night.

LeBron James explains why he couldn’t make it to Miami for the Chris Bosh jersey retirement ceremony ?

“I thought about almost taking this game off and flying to Miami for the ceremony, but the NBA been on my a–, you know about taking off games in the past so I didn’t want to test that,” James admitted with a smile. “Chris Bosh is a brother to me, I love everything about him.

“Obviously we all in this league have seen the player from out of Georgia Tech what he turned into, but more importantly the man that he is. His family, what he stands for, what he preach. It was just an honor to be with him for four years. An honor for me to come into the league in ’03 with him. It’s an honor to still be a brother of his and send a text to him before we play tonight and let him know how proud I am of him, and how well deserved seeing his jersey go up into the rafters in South Beach.”

James’ social media presence prior to Miami’s game certainly indicated that he was sad to miss Bosh’s ceremony.

Unfortunately for Bosh and the Heat, the current Miami squad could not hold on to a halftime lead and ended up falling to the Magic, 104-99.

Now, the Heat are currently on the outside looking in at the Eastern Conference playoff bracket. They have eight games left in the 2018-19 campaign to earn their way back into the playoffs standings.
[xyz-ihs snippet=”HN-300×250-TextnImage”]