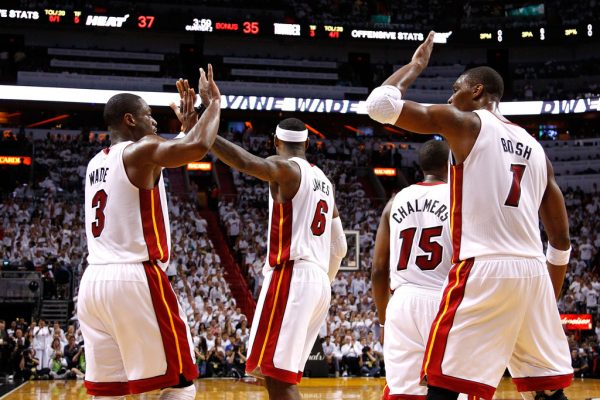 While six years have passed since the Miami Heat captured the franchise’s second NBA title, the lingering high that most fans still have from that year remains. It’s clear that former Heat forward LeBron James also hasn’t forgotten the thrill of winning that championship, using social media on Monday to bask in that past glory.

LeBron James rewatches 2012 NBA Finals Game 5 where he and the Miami Heat took down the OKC Thunder. ? pic.twitter.com/9mDirVh7ct

James, who left the Heat in 2014 to return to play for the Cleveland Cavaliers, is now a member of the Los Angeles Lakers after signing as a free agent with them last month. The 15-year veteran is waiting for the team’s training camp next month, but took some time to post a video of the clinching 2012 Game 5 Finals clash against the Oklahoma City Thunder. That memorable contest was being rebroadcast on NBA TV.

Adding the hashtag #TheHeatles, James hearkened back to the era when the Heat were the talk of the NBA, with the nickname comparing their popularity to the legendary Beatles. That was the direct result of both James and Chris Bosh‘s 2010 decision to join Dwyane Wade on the Heat to form the core of what many considered to be a superteam that would establish a dynasty.

James has every reason to continue embracing that 2012 title since it marked his first of his three league titles. Perhaps more importantly, it removed the pressure of having been on the losing end of the NBA Finals the previous season. That defeat led to many of James’ critics to gleefully point out that he had yet to win an NBA championship.

During James’ four years with the Heat, the team reached the NBA Finals in each season. In addition to winning that 2012 title, the Heat repeated that effort the following year with a thrilling comeback series win against the San Antonio Spurs, winning in seven games.

At the age of 33, James is nowhere near done with his NBA career. He and the Lakers will make their only scheduled appearance of the 2018-19 season at American Airlines Arena on Nov. 18 in a game that will start just after 6 p.m. The rematch between the two teams will take place in Los Angeles on Dec. 10, with that game getting underway just after 10:30 p.m.
[xyz-ihs snippet=”HN-300×250-TextnImage”]