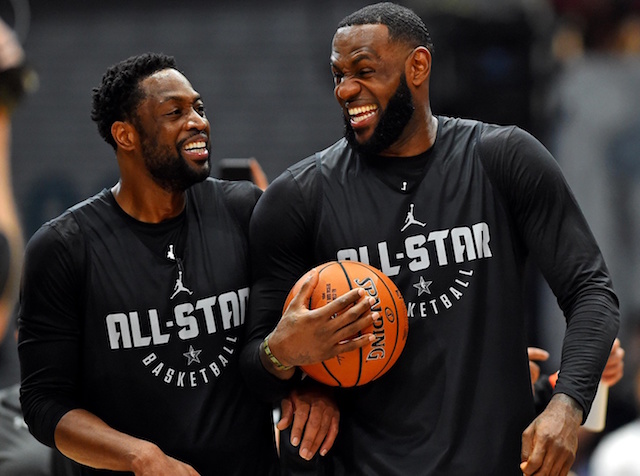 The 2019 NBA All-Star Game is just moments from tipoff, and that means former Miami Heat star LeBron James and current Heat legend Dwyane Wade are just moments from what will almost certainly be their last professional game together.

Just before the players began warming up, James spoke about what he’s most looking forward to in his final game with his close friend and former teammate.

.@DwyaneWade & @KingJames spoke with @KristenLedlow ahead of their final game as teammates. ✊#NBAAllStar pic.twitter.com/c0dmJXrhwo

“Just being back on the floor with him,” James said. “One last time, one last hurrah, All-Star and like you said the stars aligned, it all makes sense. So, it’s going to be a treat. Like I’ve been telling everybody, it’s a bittersweet moment for myself. The bitter part is that this is the last time, but the sweet part about it is how many memories that we’ve had over the years. So I’m going to look forward to all of it.”

While Heat fans may understandably have some complicated feelings towards James, there is no doubt that it is all love between the two NBA icons.

Hopefully, the minutes Wade and James share on the court in tonight’s game is something that neither the players nor the fans watching will ever forget.
[xyz-ihs snippet=”HN-300×250-TextnImage”]