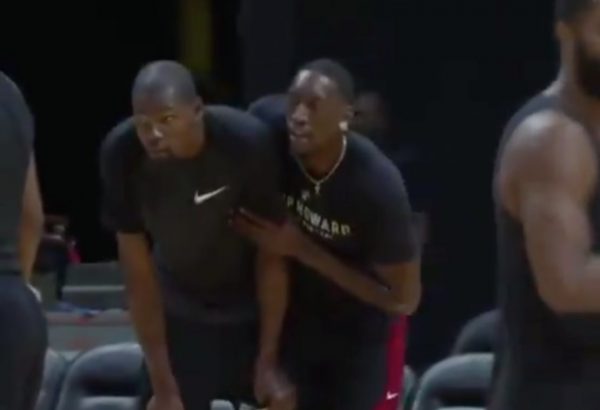 The Miami Heat continue to prepare for the start of their training camp that opens on Sept. 25, with members of the team and players seeking to earn a spot on the final roster currently getting prepared with some offseason workouts. On Monday, a very prominent trio of NBA superstars joined them for an offseason workout at American Airlines Arena, showing off their ample skills in the process.

Kyrie, KD and James Harden linked up with the Heat for some Miami summer work … ?

Unfortunately for the Heat, none of the players will be suiting up in a Heat uniform when the 2017-18 regular season tips off next month. However, Irving will be a free agent next July and Durant could also enter the free agent market after this upcoming season if he chooses to opt out of the final year of the two-year deal he signed in July.

Heat president Pat Riley would obviously love to sign one or both players, but the team is currently in a financial straitjacket due to the NBA’s salary cap. The team has spent much of the offseason looking for ways to alleviate that problem, with some players like Hassan Whiteside and Tyler Johnson reportedly on the trading block. However, it’s unlikely that any changes will be made in the near future.
[xyz-ihs snippet=”HN-300×250-TextnImage”]