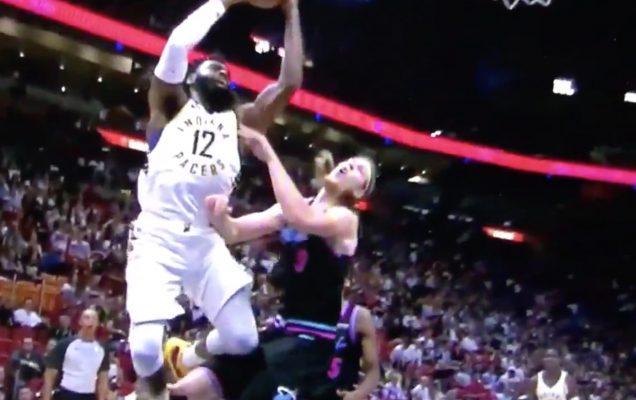 Kelly Olynyk proved that he’s willing to put his body on the line to help his Miami Heat get a victory when he took a nasty knee to the chest in Friday’s game against the Indiana Pacers.

The collision occurred in the third quarter of the game, with the Heat looking to take advantage in a close game.

Tyreke Evans knees Kelly Olynyk and the look on his face says it all ? #NBA pic.twitter.com/OxpTMVY1sr

Following the impact, Olynyk fell to the ground in pain and was later ushered to the Heat locker room.

Olynyk was having one of his best games of the 2018-19 season before his exit, as he had already recorded 20 points, four rebounds, and two assists.

No word is yet available on whether or not the power forward sustained an injury due to the impact, but surely news will come out of the locker room shortly.

Hopefully, the gritty big man is able to get back on the court soon.
[xyz-ihs snippet=”HN-300×250-TextnImage”]

Featuredkelly olynykmiami heatNews Ticker
← Previous Story Dwyane Wade Reacts to New Miami Heat Vice Nights Intro Video
Next Story → Tyler Johnson: ‘Before Any of Us Got Any Money, We Used to Be Dogs’