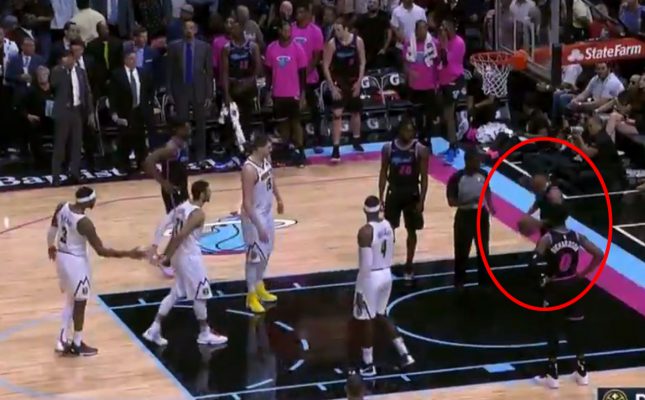 The Miami Heat let a victory over the Nuggets slip through their fingers on Tuesday night, but by the game’s end, most eyes weren’t on the scoreboard, but instead on a fan who ran onto the court just before the clock struck zero.

The incident took place with just .9 seconds left in the game after the Heat squandered an opportunity to tie it up just seconds before. Nuggets guard Jamal Murray was sent to the line after a Heat foul, but focus quickly shifted from his free throws to a Heat fan sprinting onto the court.

The fan was quickly subdued, Murray completed his free-throw shots, and the game came to end.

Unfortunately for Heat fans, the young man rushing the court was the only cause for smiles late in the game. While the Heat led for much of the fourth quarter, the Nuggets went on a late-game run, led by big man Nikola Jokic, to claim victory.

Despite the loss, the Heat put in a strong team performance. Seven players finished with double-digit scoring nights, with Dion Waiters leading the way with 15 points in the game. After going 8-2 in their previous 10 games, the Heat have now dropped their last two. They will look to right the ship on Thursday night when the Boston Celtics come to South Florida.
[xyz-ihs snippet=”HN-300×250-TextnImage”]