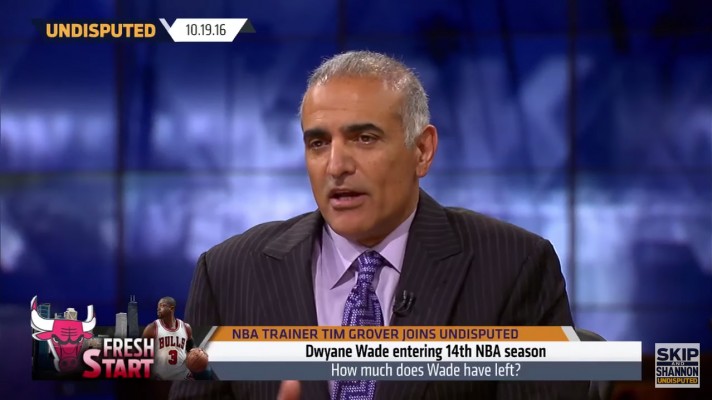 Based off the way Dwyane Wade and the Miami Heat‘s relationship ended back in July, the potential for a reunion in the future appears slim.

However, one source close to the 13-year veteran seems to think that Wade will be donning a Heat jersey again at some point in his career.

On the set of Fox Sports 1’s “Skip and Shannon: Undisputed”, Wade’s former trainer, Tim Grover, explains why he thinks the star will finish his career in Miami.

Grover, owner and CEO of Attack Athletics, has worked with the likes of Michael Jordan, Kobe Bryant, Charles Barkley in the past.

The Chicago-based trainer played a big role in helping Wade get back into MVP caliber form after the guard’s knee and shoulder injuries in 2008. The two grew close as the All-Star realized how important keeping his body in shape was.

During the 2012 NBA Finals, when Wade’s knee started causing problems, he called Grover to Miami to help him work on his body and mind. It’s no secret how valuable the trainer has been over the course of Wade’s career. The 34-year-old even explains how much he trusts and believes in Grover in this video.

Although the duo parted ways after 13 years, a move Wade felt was needed going into his mid-30s, they still have a great relationship. So much so that Grover strongly feels that the future Hall of Famer will eventually retire in Miami.
[xyz-ihs snippet=”Responsive-ImagenText”]