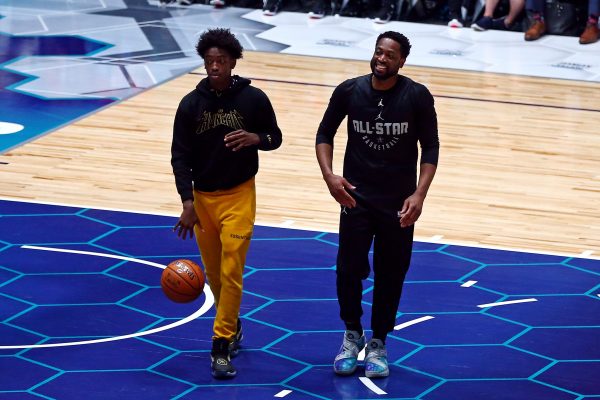 Dwyane Wade was fielding questions at All-Star media day on Saturday when a familiar voice chimed in.

The Miami Heat legend’s son Zaire Wade appeared in the media scrum to ask his father a fantastic question. It created quite a memorable back-and-forth conversation between the two.

⚡️ @dwyanewade had a quick response to this #NBAAllStar Media Day question from Zaire ?? pic.twitter.com/sqr9VJe5WF

“Mr. Wade, do you think you can beat your son one-on-one?”

The veteran shooting guard was ready with a quick answer:

“Do I think I can beat my son one-on-one? Been there, done that. Next. I’m gonna play him one more time after this season, it’ll be my last time ever playing him one-on-one, and we’ll see what he got.”

As the elder Wade gets ready to retire from the NBA at the end of the season, his son looks to one day pick up the mantle.

The 17-year-old guard is in his junior season of high school and is receiving a fair amount of attention from Division 1 basketball programs. He has legitimate aspirations of making it to the NBA, just like his father did 16 seasons ago.

Dwyane Wade is currently averaging 14.0 points, 3.8 rebounds, and 4.3 assists per game. Though he wasn’t initially chosen as an All-Star, he was added by commissioner Adam Silver as a special selection to honor his storied career.

Interactions like this one prove that Silver knew exactly what he was doing when he added the Heat star to the All-Star roster.
[xyz-ihs snippet=”HN-300×250-TextnImage”]